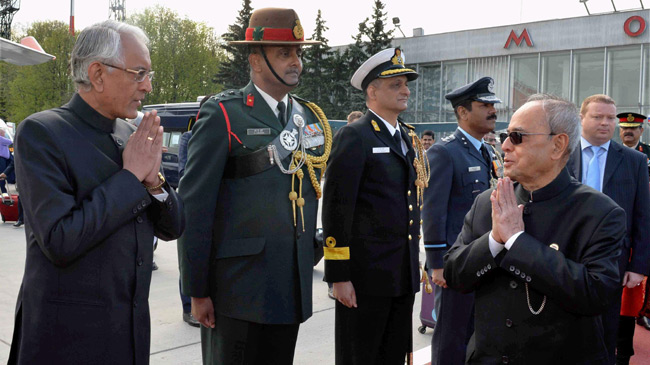 12 May, 2015
Print this article Font size -16+
President Pranab Mukherjee said Russia is India's "dependable partner" in defence and energy sectors irrespective of Moscow's growing ties with any other nation.
"Our relationship stands apart. Russia is and will be a dependable partner in defence matter and energy security despite the relationships with other countries developed by Russia or developed by India," Mukherjee told reporters accompanying him on a visit to Russia.
The president on Monday completed his five-day visit to Russia.
He was asked whether he raised the issue of Russia's move to supply defence equipment to Pakistan during his meeting with Russian President Vladimir Putin.
Mukherjee held a 45-minute meeting with Putin on Saturday in a "wide-ranging review of our bilateral cooperation", the Ministry of External Affairs said in New Delhi.
Russia has lifted its embargo on defence supplies to Pakistan and the two sides are working on ways to boost their defence ties.
Pakistan and Russia have also agreed to hold their first-ever joint military exercises.
Mukherjee said his visit reflected the importance India places on its strategic partnership with Russia.
Referring to the annual summit meeting between Prime Minister Narendra Modi and Putin held in Delhi in December, Mukherjee said there was progress on defence, nuclear energy and space cooperation.
Bilateral Trade
Trade between India and Russia is $6 billion annually, which is 0.8 per cent of India's total trade of $765 billion.
"Given the size of our economies, there is huge potential to enhance commercial and investment exchanges. It is a challenge for all of us to utilise synergies and new opportunities that are arising between the two economies," Mukherjee said.
The export of buffalo meat from India to Russia has commenced while shipments of milk products are expected to begin soon.
"Bovine meat export to Russia has commenced while export of milk products from India will begin soon," Foreign Secretary S. Jaishankar said.
Indian Ambassador to Russia P.S. Raghavan said Russia approved certain Indian companies to export buffalo meat and this was part of the broader agreement for export of farm products from India.
Jaishankar said that a regulatory framework has been set up for diamond exports while Russia has also shown interests in investments in Indian infrastructure projects and smart city projects.
Nuclear Energy
There is "steady progress" on Indo-Russia civil nuclear energy cooperation and the second unit of the Kudankulam project is "progressing satisfactorily".
"On civil nuclear energy cooperation, there has been steady progress. The Kudankulam Nuclear Project-2 (KKNP2) is progressing satisfactorily towards commissioning. Contracts for supply of equipment for KKNP3 and 4 have been concluded," Jaishankar said in a ministry statement.
Jaishankar added that a number of steps were being taken to boost space cooperation as well as in energy.
The heads of Russian and Indian space agencies have drawn up a plan for reinvigorating space cooperation, including celebrating the 40th anniversary of the launch of Aryabhatta from the then Soviet Union.
"On energy cooperation it was noted that Oil and Natural Gas Corporation Limited (ONGC)'s investment in Sakhalin-1 (oil field) had been very successful. Its MoU with Rosneft for exploration on the Arctic Shelf is being progressed," Jaishankar said.
GAIL's contract for liquefied natural gas (LNG) supply to India has entered into force, he added.
'Namaste Russia'
Mukherjee on Sunday inaugurated a seven-month-long festival of Indian culture "Namaste Russia".
Director General of Indian Council for Cultural Relations Satish C. Mehta said Indian groups will perform dance, music in various cities in Russia during the festival.
The festival will be held between May and November in Moscow, St Petersburg, Kaliningrad, Kislovodsk, Rostov-on-Don, Ufa and others cities.
It is being hosted under the patronage of the Ministry of Culture of the Russian Federation and Indian Council for Cultural Relations (ICCR).
Around 15,000 Indians live in Russia of whom 4,000 are students.
(Agencies)
Tags assigned to this article:
trade ongc top 2 nuclear power pranab mukherjee pakistan defence vladimir putin rosneft russia nris moscow s jaishankar kudankulam project indian council for cultural relations