Rupee Slumps To Record Low; Closes In On 60/dollar 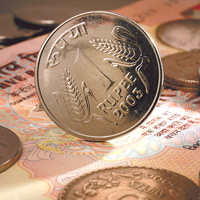 08 November, 2014
Print this article Font size -16+
The rupee slumped to a record low of 59.9850 on 20 June' 2013 as India's record high current account deficit is exacerbating its vulnerability in an emerging market rout, although interventions by the Reserve Bank of India (RBI) prevented further falls.
The RBI was seen buying rupees at around the 59.90 to a dollar mark on at least two occasions, but the currency tanked 1.4 per cent, among Asia's worst performers on a day which saw currencies tumble from Mumbai to Manila.
The US Federal Reserve's signal of a rollback in its monetary stimulus has raised fears that it may signal the end of cheap money, critical to funding India's current account deficit that hit a record high of 6.7 per cent of gross domestic product in October-December.
Data showing China's factory activity weakened to a nine-month low in June added to the selling pressure.
Traders said the rupee's outlook would hinge on global factors for now, although they expected a more stable currency in the near term.
"I think the move in the rupee was a bit exaggerated and more of a knee-jerk reaction to the global moves. Over the weekend, I expect some stability to return to the rupee," said N. Venkatesh, head of treasury at IDBI Bank.
The partially convertible rupee closed at 59.57/58 per dollar, against its previous close of 58.71/72. It had fallen to 59.9850 during the session, breaching its previous record low of 58.98 touched on June 11.
The government also stepped in to calm nerves, with the chief adviser to the finance ministry, saying the government was not short of options to tackle the rupee's fall.
Yet, the absence of specific measures continues to haunt markets. The government's most likely immediate reform move, raising caps on foreign investment in various sectors, is likely to have a longer term salutary impact on the rupee.
After a surge of easy money both into equity and debt markets in the beginning of the year, foreign funds have been heavy sellers of rupee debt as the yield differential with the US shrinks and a falling rupee raises hedging costs.
In the offshore non-deliverable forwards, the one-month contract was at 59.99, while the three-month was at 60.67.
In the currency futures market, the most-traded near-month dollar/rupee contracts on the National Stock Exchange, the MCX-SX and the United Stock Exchange all closed around 59.80 with a total traded volume of $11.5 billion.