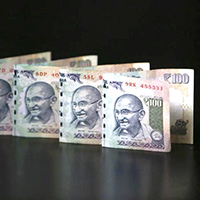 08 November, 2014
Print this article Font size -16+
The rupee rallied to 11-month high of 58.71 against the dollar early today on persistent selling of the US currency by banks and exporters on hopes of higher foreign capital inflows as election results showed clear chances of a stable government at the Centre.

Weakness of dollar in the overseas market also boosted the rupee value, a forex dealer said.

Besides, stock markets in India shot up to record levels, crossing 25,000 points - up more than 1,100 points - for the first time as election result trends poured in, indicating strong overseas inflows.

Banks and exporters preferred to reduce their dollar position on expectation of more funds on the back of strong equity market.

The rupee resumed higher at 59.00 per dollar as against the last closing level of 59.29 at the Interbank Foreign Exchange (Forex) Market.

The domestic currency moved in a range of 59.00 and 58.71 per dollar during the morning deals.

In New York market, the dollar reversed course yesterday, falling against the Japanese yen as US Treasury yields slumped.