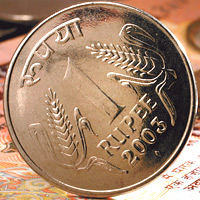 08 November, 2014
Print this article Font size -16+
The rupee dropped to one-and-half month low of 54.25 against US dollar before regaining some ground today amid persistent demand for the American currency from banks and importers as it made gains in the overseas forex markets.
The rupee opened lower at 54.10 per dollar as against the last weekend's level of 53.81 at the Interbank Foreign Exchange (Forex) Market and dropped further to about 6-week low of 54.25. Later, it was quoting at 54.13 a dollar at 1050 hrs. The rupee moved between 53.90 and 54.25 against the American currency in the morning deals.
Sustained dollar demand from banks and importers in view of its higher value in New York market affected the rupee, a forex dealer said.In New York, the dollar rallied last Friday, amid stronger-than-expected US jobs growth.
Meanwhile, the BSE 30-stock index, Sensex, firmed up by 22 points or 0.12 per cent to 18,771.12 at 1100 hrs.
(PTI)
Tags assigned to this article:
economy india news 3 rbi dollar forex rupee foreign exchange