Rupee Down 25 Paise Vs Dollar 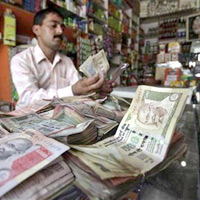 08 November, 2014
Print this article Font size -16+
The rupee weakened by 25 paise to 53.06 against the US dollar in early trade, extending previous losses at the Interbank Foreign Exchange due to increased demand for the American currency. Besides increased dollar demand from importers and euro's weakness overseas ahead of a European leaders austerity meeting later in the week, a lower opening in the domestic equity market put pressure on the rupee, forex dealers said.
Meanwhile, the BSE benchmark Sensex fell by 74.52 points, or 0.39 per cent, to 18,600.66 in early trade. The rupee had lost 13 paise to end at 52.81 against the dollar in the previous session on 12 October.
(PTI)
Tags assigned to this article:
economy india inflation stockmarket news 4 markets dollar forex rupee euro foreign exchange inflation data