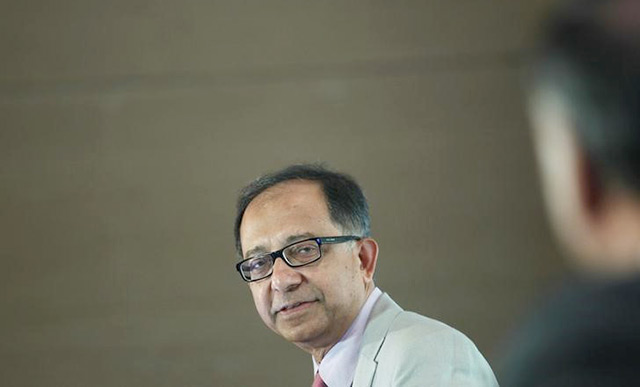 16 June, 2015
Print this article Font size -16+
The World Bank on Wednesday cut its global growth outlook for this year and urged countries to "fasten their seat belts" as they adjust to lower commodity prices and a looming rise in US interest rates.
Kaushik Basu, the World Bank's chief economist, said the Federal Reserve should hold off on a rate hike until next year to avoid worsening exchange rate volatility and crimping global growth.
In its twice-yearly Global Economic Prospects report, the global development lender predicted the world economy would expand 2.8 per cent this year, below its 3 per cent prediction in January.
It said low commodity prices, especially the roughly 40 per cent drop in oil prices since last year, had hurt commodity exporters more than anticipated. The World Bank also warned countries to prepare for higher US interest rates, which would raise borrowing costs for developing economies.
"We at the World Bank have just switched on the seat belt sign," Basu said in a press conference in Washington. "We are advising nations, especially emerging economies, to fasten their seat belts."
Basu said lower commodities prices eventually should help global growth, and the World Bank kept its global growth forecasts unchanged for next year and 2017.
It also predicted that India would be the fastest-growing major economy for the first time this year, growing at a rate of 7.5 per cent, up from the previous forecast of 6.4 per cent.
But the World Bank cut its 2015 growth forecast for developing countries to 4.4 per cent, from 4.8 per cent in January, pointing to the drag of expected recessions in Brazil and Russia.
It also lowered the growth outlook for the United States to 2.7 per cent this year, from 3.2 per cent in January, and to 2.8 per cent next year, from a previous forecast of 3 per cent. The US economy slumped at the beginning of 2015 due in large part to bad winter weather, a strong dollar, port disruptions and deep energy sector spending cuts.
"If I were advising the US Fed, I would recommend that (higher rates) happen next year instead of late this year," due to the mixed economic picture, Basu said, adding that it was his own view rather than that of the World Bank as a whole.
"My own concern is that a relatively early move (in US rates) could cause an exchange rate movement, strengthening of the dollar, which will not be good for the US economy" and have negative repercussions for other countries, he said.
There will be more volatility in global markets and weaker economies will suffer, the report said.
Those economies will pay more to borrow and incoming investment will be harder to attract, effectively adding more downward pressure on currencies that have already fallen significantly against the dollar over the past year.
(Agencies)
Tags assigned to this article:
kaushik basu economic growth news 9 forex interest rate world bank federal reserve