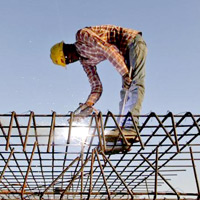 08 November, 2014
Print this article Font size -16+
K. Ramchand, managing director at one of India's biggest road builders, is doing something unusual to help dispel the gloom pervading much of the country's infrastructure sector today: bidding for new projects.

His company, IL&FS Transportation Networks Ltd, signed a $300-million contract in April to build a six-lane highway. The project will link an eastern industrial zone afflicted by some of India's worst traffic snarls to mining districts such as Dhanbad, the nation's coal capital.

The IL&FS deal marks a sharp turnaround from last year when investor interest in public works plummeted. To rekindle investment in new, modern roads that India badly needs, the government has been rolling out a slew of policy measures, including a strategic shift in how projects are financed.

"Last year, I think, has been a typically bad year," Ramchand said in an interview at a hotel in the business hub of Gurgaon outside New Delhi. "There is definitely an upswing, there is no doubt about it, because I think the mood is much better."

The most significant policy change is that the government has moved away from its much-vaunted but troubled public-private partnership (PPP) model to fund projects.

Under the PPP model, developers finance construction out of their own pocket, often in exchange for the right to charge toll fares.

The government will revert to a form of contract where it funds part of the road building, taking on more of the risk of the project itself, said a top government official, speaking on condition of anonymity.

To give some idea of the scale of the change, the government will fund 70 per cent of the 9,600 kilometres (5,965 miles) of road projects that it aims to award this fiscal year.

That is a sharp departure from the goal set earlier by India's Planning Commission to build 60 per cent of roads in public-private partnership.

The changes have even drawn the attention of foreign private equity players, with the likes of Macquarie Group Ltd looking to acquire completed projects.

Choked & Constricted
India relies heavily on roads to move freight due to its archaic railway network and under-developed river canal system. But its roads are often constricted, pot-holed and choked with traffic, slowing deliveries and hitting competitiveness.

"Road costs in India are higher by about 30 per cent," McKinsey said in a report, comparing them with costs in the United States. "This not only results in higher prices and lower competitiveness, but also hampers economic growth."

The government plans to pour $1 trillion into infrastructure over five years. But its efforts to attract private investment have stumbled, partly because of red tape and cautious bankers.

India awarded less than 2,000 kilometres worth of new road construction contracts in the last fiscal year, against a target of 9,500 kilometres.

To get investment in the sector moving again, the government has tweaked its policy so that developers no longer have to wait for clearance from forest authorities to start construction - a hassle that had stalled projects in the past.

Another boon is the central bank's move to reclassify loans to road builders as secured loans rather than unsecured loans, which would give more comfort to banks to lend to projects.

Rival Lanco Infratech Ltd said in an interview in May that it aims to sign one or two road projects this year. It last won a contract in 2010.

Another developer, KMC Constructions Ltd, which has a tie-up with the private equity firm 3i Group PLC, is also scouting for projects to add to its $580 million order book.

"We're looking at the projects, definitely, because this is the time to bid for the projects," said Shashank Shekhar, vice president for business development at KMC.