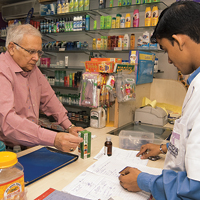 Global research firm ims health, which predicted in April that the global pharma market would shrink in 2009 — for the first time in 25 years — has revised its forecasts, predicting a better outlook for the sector.

According to the company, higher than anticipated demand caught pharmacies off guard, forcing them to rebuild inventories slashed late last year. Meanwhile, drug makers were able to implement price increases despite the struggling economy, leading to the improved forecast.

However, growth over the next five years is expected to be anaemic. IMS Health predicts global pharmaceutical sales will grow at a 4-7 per cent compound annual growth rate through 2013, raising its estimates by 1 per cent. Considering the projected market size of $975 billion, 1  per cent is not negligible, and that's good news for India's drug makers. However, if the industry wants to get back to double-digit growth, it will still need to increase its presence in fast-growing emerging markets, diversify into new businesses and step up its R&D efforts.