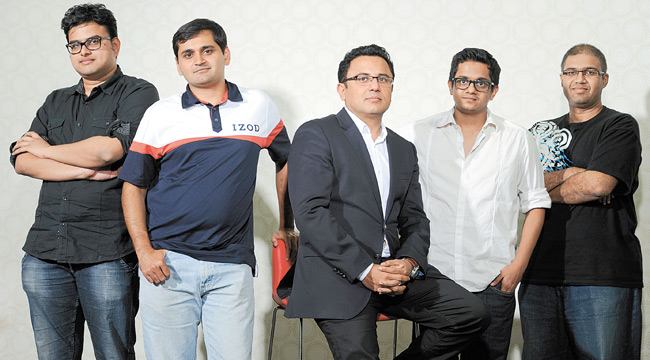 04 May, 2015
Print this article Font size -16+
A large organisation may not be able to innovate successfully doing everything on its own. This is the hard truth in the retail industry. Corporations with high revenues, such as the $473-billion Walmart, the $130-billion Tesco PLC or the $72-billion Target have seen their profits drop because of the unpredictable shopping habits of millennials: they compare product prices on their smartphones rather than visit a store. So how do large companies change? They begin by working with startups that have built platforms to engage and understand consumers. Walmart’s information technology arm Walmart Labs has acquired 13 startups globally, since 2011; Tesco has sponsored a startup accelerator, Rainmaking Loft, in London. Infosys, too, wants to work with startups as it believes this would give the company an edge in business deals.

The writing is on the wall: take the digital consumer on board to remain relevant. Yet, Target is the first global corporation to take the plunge by working with Indian startups. “It is a time of unprecedented change driven by smartphones,” says Target India president and managing director Navneet Kapoor. “Relevant merchandising and inventory management are the future of retail. We need to connect with our guests beyond sales data, and technology allows us to connect with them on a real-time basis. Indian startups are helping us with ideas, ranging from content to customer engagement to intelligent search.” In less than a year, Target has worked with 10 startups and signed vendor agreements with a couple of them. It plans to sign up two more startups this year.

From Ideas To Execution
Last year, Target picked five start-ups — Konotor, InstaClique, Turnaround Innovision, MuHive and UnBxd — to work on piloting their ideas with more than 100 stores in the US. Each of these startups tackled one pain-point that Target was facing (see pg 61). Konotor started out by building messaging apps in 2012 before discovering its selling point in taking note of usage patterns that users create on applications. “We realised that mobile apps need a different form of engagement as so much data was being generated by conversations,” says Konotor co-founder Srikrishnan Ganesan. The platform can be used to segment people on an active and non-active basis. This is where the analytics kicks in for retailers: they can use the active user data to push relevant messages to individual shoppers or floor managers who visit the app. Konotor developed an internal messaging application for store managers to communicate with headquarters faster. “It is a mobile communications bridge where quick queries on product, including pictures of stock-outs, can be uploaded and sent to management teams,” says Ganesan.

Target has offered Konotor a vendor contract to resolve real-time problems in stores. Konotor now counts Big Basket, Faasos, Ticketgoose as its clients in India. Its platform boasts of 15 million users across 60 apps.

Bangalore-based social analytics platform MuHive has also bagged a contract with Target. It collects the comments of consumers on products and services offered by retailers on their respective Twitter and Facebook feeds and frames questions for them. The retailers then work with MuHive to find answers based on sentiment analysis of the text on social media. “If a retailer is launching an electronic device or apparel campaign, he must know the kind of product his target audience would like and stock only that in the store,” says co-founder Sagar Vibhute.

MuHive’s platform fits with Target’s Express store format — 20,000 sq. ft stores, used as delivery centres for orders placed online. Say, a customer doesn’t like the fit of a jeans outfit and comments on the brand’s social feed. Target figures out which store in her locality would have the right fit and delivers it to her before she can take it to the store.
Bangalore-based Unbxd worked with Target’s e-commerce platform to make the search engine more intelligent. “Our technology picks up user behaviour on the site and makes suggestions,” says co-founder Prashant Kumar. The company now has 250 global customers. “Working with Target gave us the requisite experience to find retailers around the world,” says Kumar. The company now studies 20 million user events a day and counts Yepme, Madura Garments and Pepperfry as its clients.

This year, Target selected five companies from among 3,000 applications received in December 2014. One of the first problems it wanted to solve was a guest’s inability to find the right apparel in the company’s store and on the website. Target brought in Wazzat Labs to build a visual search engine on a pilot basis to power its e-commerce store. The Hyderabad-based startup’s five founders are machine learning experts; for them “images speak a million words” and they know that creating visual recognition algorithms for e-commerce or mobile sites can lure young customers. “The algorithm recognises image uploads and matches the available apparel and inventory to fit the person’s choice,” says Mautik Kulkarni, one of the founders.

Meanwhile, Whodat from Bangalore is building an artificial intelligence or gesture recognition technology for apps, which uses the camera. Say, a customer wants new furniture for her house. She goes shopping on an e-commerce site, but can’t make up her mind. She can merely take a printout of a paper marker provided by the catalogue, and point her cell phone camera towards the living room, along with the paper marker. The furniture of her choice and colour will show up as a virtual image in the frame. “Our visualisation technology can change the way a store is designed; it brings the store to the living room,” says Sriram Ganesh, co-founder of Whodat.

Visarity is a self-funded startup that solves the problem of displaying websites and their products to fit different screen sizes and operating systems of devices. “Our real-time rendering engine compresses high definition images and makes them interactive on the mobile,” says co-founder Harsha Padmanabha. The firm has opened the 3D platform for developers to create and test their creations. Padmanabha and partner Bastian Zuehlke began building chips for automobile firms before devoting themselves to interactive technology. Today their technology is used in the websites of automotive giant Mercedes, among others. “Our tool has helped clients increase their clicks per impression, which translates into better customer involvement in buying the product,” says Padmanabha.

Target is also working with Synapse, a one-year-old startup, whose technology recognises customers when they walk into a store and pushes relevant messages to their smartphones. “Our platform brings context into the picture, after which content takes over,” says Ranjan Jagganathan, co-founder of Synapse. He adds that his company’s technology allows retailers to know where the customer is located in the store. “Imagine sending messages to the locked screen and getting users to make additional purchases because of the relevant content,” he says.

Target may have read the India story right. But to ramp up its revenues it needs to figure out if consumers are ready for this pathbreaking technology. The attempt, nevertheless, is noteworthy.