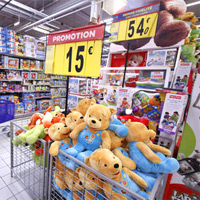 08 November, 2014
Print this article Font size -16+
Multi-brand retailing is finally going to take centrestage in India as the government cleared the FDI policy to accommodate 51 per cent foreign ownership in Indian retail. Now valuations will play a key role in determining partnerships. Valuing Indian retail companies, their debt, their lease agreements and the current liabilities on the books will be a cumbersome task. However, partnerships will bloom, the Bharti-Walmart JV will get even more sophisticated, the Max Hypermarkets-Auchan deal will morph in to something more than a royalty agreement and it will give Aditya Birla's More teeth to compete with Biyani's Big Bazaar and Reliance. Even Kishore Biyani could find a global partner to take on Reliance Retail. But amidst the joy, many Indian retail companies who think their suffering is over, may get a rude awakening because due diligence will show that most do not have any strong process, either at the back or the front end, to attract investments. Retailers like Provogue, Brandhouse Retail and Total will have to tweak their models to find partners.

“It will take some time before FDI flows in because the whole valuation process will begin and a lot of structures have to be figured out,” says Pinakiranjan Mishra, partner and national leader of Consumer Markets in consulting firm E&Y. Once the debt structures are sorted, these foreign companies will get the best valuations in the Indian market. “Companies that think they have just opened 100 stores will probably not get good valuations because you need a good back-of-house operations, productivity per square feet must be high and finally you need to have paid some of your creditors,” says a mall manager in Delhi.

Businessworld’s analysis of 150 retail companies in India showed that the total debt was close to Rs 21,353 crore and current liabilities close to Rs 9,000 crore, with bills payable extending to more than 70 days,  suggesting a stretch in day to day operations. Only 20 companies were generating cash from operations. A large chunk of organised retailing has burnt cash since 2006; there have been stories where businessmen could not raise money on time to pay off their creditors. Subiksha’s Rs 800 crore and Vishal Retail’s Rs 700-crore defaults were case in points to why Indian retail was a bit stretched over the last couple of years.

Read: Govt Has Its Big Bang Moment
Read: Mamata Sets 72-Hour Deadline On Retail FDI
Read: Govt Allows 49% FDI In Aviation Sector
Read: Broadcast Sector Reform: FDI Up To 74% To Be Allowed
Read: India Eyes $2.6 Bn From Disinvestment
Read: Govt Bites The Bullet, Hikes Diesel Price By Rs 5
These retailers apart, the opportunities for thousands of mid-sized organised retailers, who want to pursue their goal of being large retailers, are close at hand. Online companies, which created backend companies to infuse cash from funds of foreign origin, can restructure their operations now that the FDI policy is through. This will also enable Indian pharmacies, jewelry stores and other specialist retail outfits to tie up with foreign retailers. “Remember the tax structures should be very clear, most Indian retailers do not pay service taxes and neither do they create a contingent liability reserve in the balance sheet,” says a source who was consulting a large Indian retailer. As of today the best deal that could have happened is Aditya Birla snatching away Future Group’s pet Pantaloon stores. But that deal itself has taken longer than usual and is being renegotiated. Investments will also be allowed in Indian malls where foreign funds could so far only invest in constructing a mall and not in its retail operations. Again the valuation of income and yield is very low as the business models of retail stores located in malls is driven more towards operations rather than productivity per square feet. It will be sometime before foreign funds take India seriously because of the 250 odd malls, only 10-15 malls in the country are making money.

However, all is not doom and gloom. According to AC Nielsen, the penetration of organised retailing in India is very small, there are 6 organised retail stores for every 1,000 disorganised stores, there are about 100 in China to every 1,000. Hopefully, FDI will change the balance, but India will have a unique model where bigger stores will coexist with the smaller ones.

“There will be increased investment in supply chain; cold storage infrastructure will help in reducing the wastage percentages of 30 percent to 40 percent of food produce from farm to fork,” says  Akash Gupt, Executive Director at PwC.

Analysts add that technology transfer to Indian companies will enable best practices in crop management, food safety and hygiene, therefore improving the quality of food products across the board. This together with the back end infrastructure development will help the farmers maximize their earnings and value. “The Indian retail players are today bleeding and they will have access to overseas funds which will allow the Indian players to harvest their value and be a partner in the retail growth story,” says Gupt.
Tags assigned to this article:
exclusive to web vishal krishna news 9 walmart bharti walmart big bazaar retail fdi hypermarkets royalty agreement current liabilities retail companies fdi flows consumer markets global partner we exclusive reforms 2