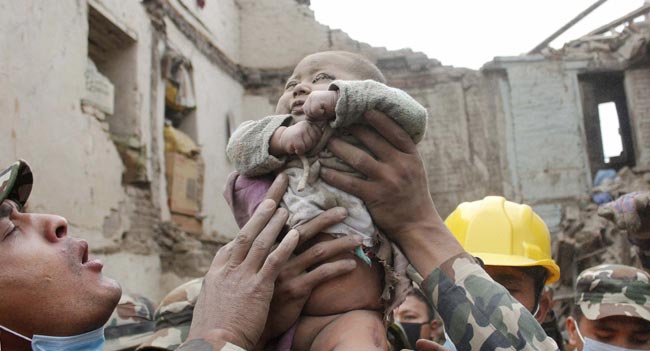 04 May, 2015
Print this article Font size -16+
Even as Nepal struggles to come to terms with its worst earthquake disaster in over eight decades, rescuers from around the world, including India, are scrambling to locate survivors and bring succour to the needy.
Humanitarian efforts have poured in from all parts of the world, from the day the disaster struck the Himalayan nation, killing over 6,200 people. Nearly 14,000 people have been injured.
Prime Minister Sushil Koirala has said the death toll from the quake could reach 10,000.
The quake has affected eight million people, with at least two million in need of tents, water, food and medicines over the next three months.
Kathmandu is teeming with uniformed international rescuers, who battle against all odds, sifting through mountains of debris to look for survivors, still feared trapped beneath it, on the sixth day since the tragedy struck.
A 7.9 Richter scale earthquake and succeeding aftershocks tore through the nation of 28 million people last Saturday, leaving a trail of deaths and unimaginable devastation.
Besides neighbouring countries like India, China and Pakistan, helping the battered nation restore to normalcy, the US has sent in its team.
And, miraculous survivors, like a five-month-old baby or a teenage boy pulled out of the rubble only provide a glimmer of hope in this hour of darkness and stand testimony to the feats of human strength - physical and mental.
And as rescue workers held the little baby up in air, gloomy silence, momentarily gave way to loud cheers.
Nepal's Finance Minister Ram Sharan Mahat said the country would need $2 billion to rebuild homes, hospitals, government offices and historic buildings.
"This is just an initial estimate and it will take time to assess the extent of damage and calculate the cost of rebuilding," Mahat told a news agency.
The United Nations estimates 600,000 houses have been destroyed or damaged.
Adding muscle to the humanitarian effort are relief workers from Geneva-based institutions International Committee of the Red Cross (ICRC), and Doctors Without Borders (Medecins Sans Frontieres or MSF) providing the vital human link and compassionate touch amid chaos, pain and panic.
"We are a team of 61 people from MSF. Our first cargo plane from France, containing four inflatable tents to construct field hospital, as well necessary medical supplies has already arrived.
"On Wednesday, a team was able to get more than 200 shelter kits to the village of Gumba in Gorkha district.
Further assessments were being carried out in hospitals in Kathmandu and Bhaktapur to evaluate the capacity for management of 'crush syndrome'," a senior official of MSF India said.
The government would provide $1,000 in immediate aid to the families of those killed and $400 for cremation or burial, Information Minister Minendra Rijal.
(Agencies)
Tags assigned to this article:
news 8 nepal nepal earthquake kathmandu sushil koirala ram sharan mahat