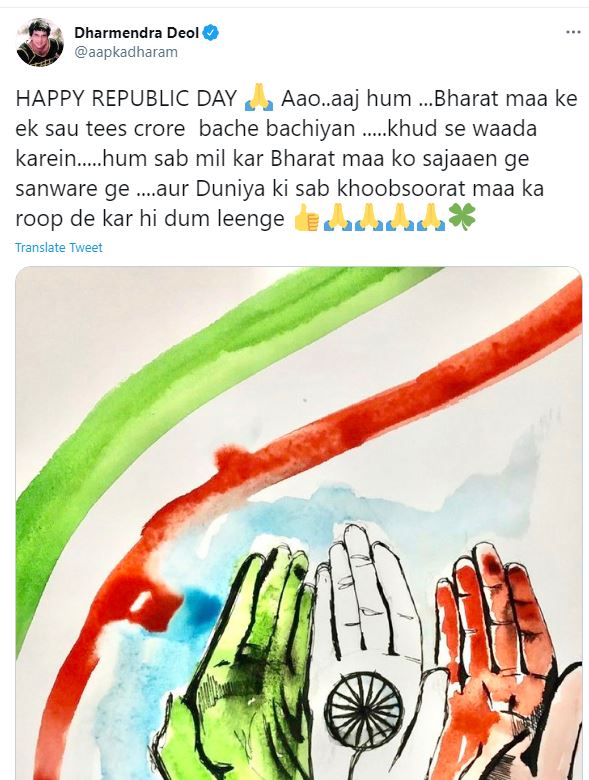 The 'Sholay' star also penned down a note to his fans. 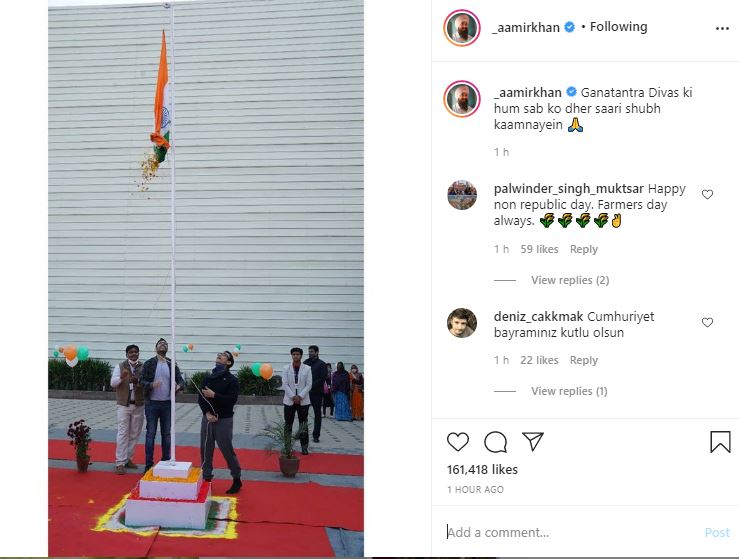 Aamir Khan took to Instagram and shared a picture of himself hoisting the national flag, Along with the picture, the 'PK' star extended wishes on Republic Day with a folded hand emoticon.
By sharing a video of the India Gate, Red Fort and The Taj Mahal, the 'Heroine' star extended Republic day greetings on Instagram. 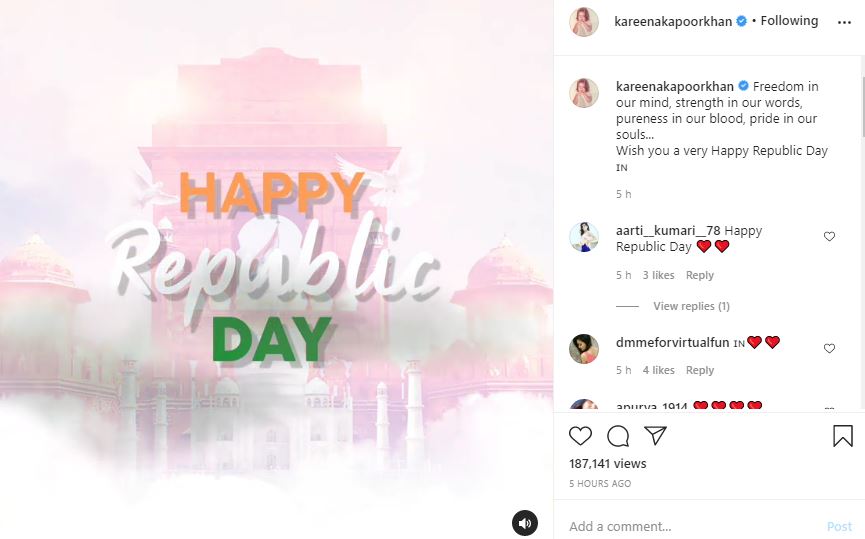 She noted in caption, "Freedom in our mind, strength in our words, pureness in our blood, pride in our souls...Wish you a very Happy Republic Day."
Shilpa Shetty Kundra took to Instagram and shared a photo featuring herself sporting orange dupatta and white suit as she extended good wishes on the special occasion. She noted, "Bahattarwe (72nd) Gantantra Diwas ki dheron shubhkaamnayein. A very Happy Republic Day to every Indian." 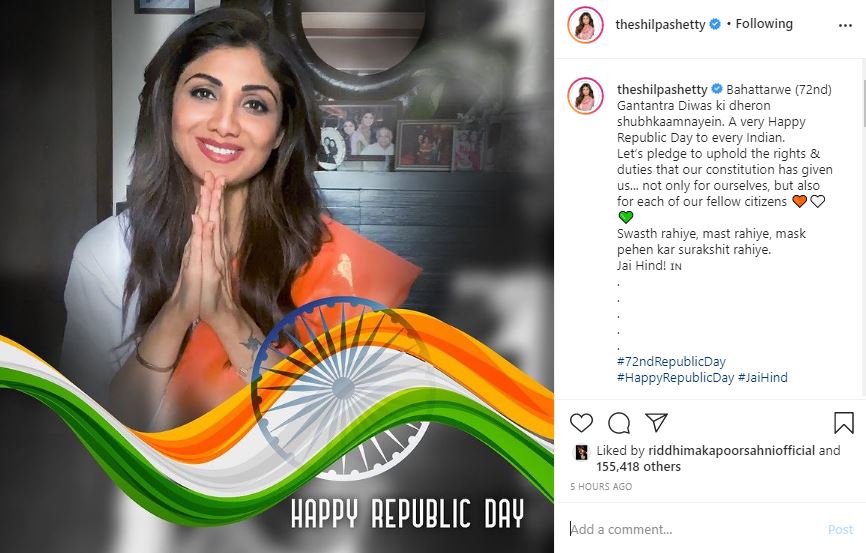 "Let's pledge to uphold the rights & duties that our constitution has given us... not only for ourselves, but also for each of our fellow citizens .Swasth rahiye, mast rahiye, mask pehen kar surakshit rahiye. Jai Hind! #72ndRepublicDay #HappyRepublicDay #JaiHind," she added.

Taapsee Pannu took to Twitter and penned a piece of advice to be followed, she wrote," On 72nd Republic Day here's wishing and hoping that we all read and understand our constitution as much as we celebrate it. Will help us be more patriotic than what we actually are. Jai Hind. #HappyRepublicDay2021." 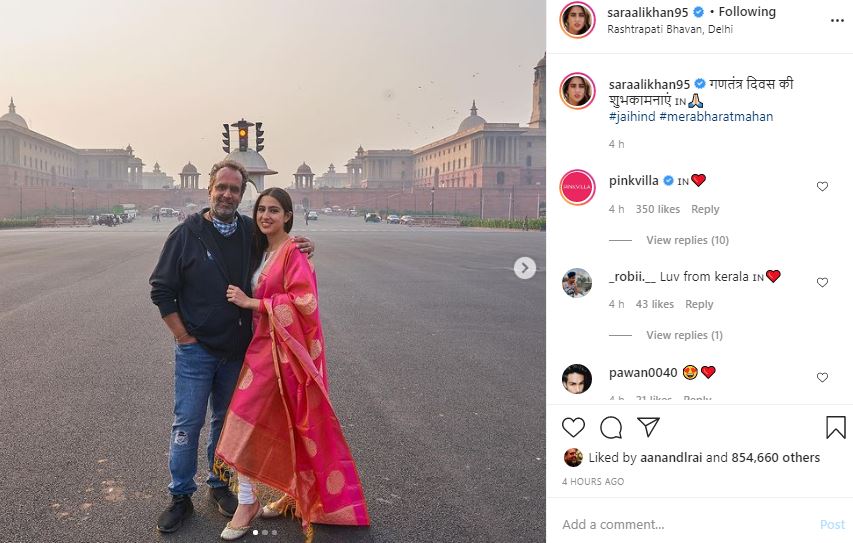 Sharing some pictures with 'Atrangi Re' director Aanand L Rai, Sara Ali Khan extended greetings on Republic Day by sharing pics of the duo as they pose nearby Rashtrapati Bhawan. In the caption, she wrote in Hindi " Many congratulations on Republic Day. My India is great." 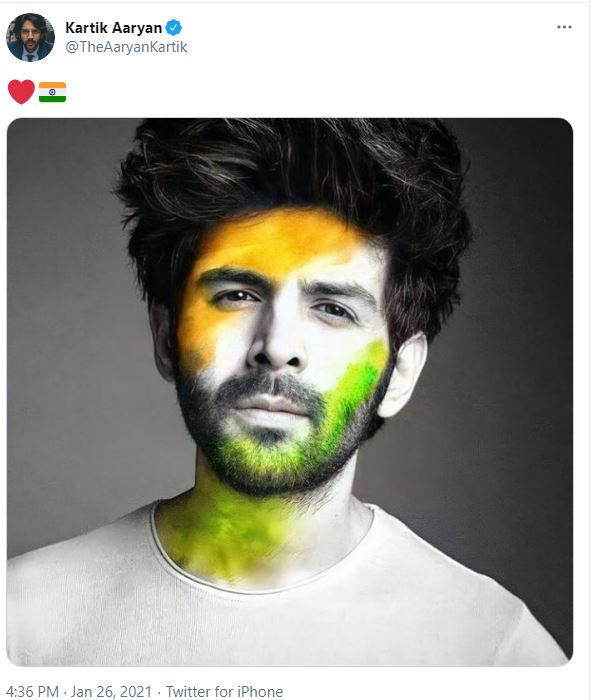 Kartik Aaryan took to Twitter and shared a close up picture of his face, that had the tri colour pattern on. Keeping the caption simple, the 'Sonu Ke Titu Ki Sweety'star left a red heart and a flag emoticon to express his love for the nation on Republic Day. 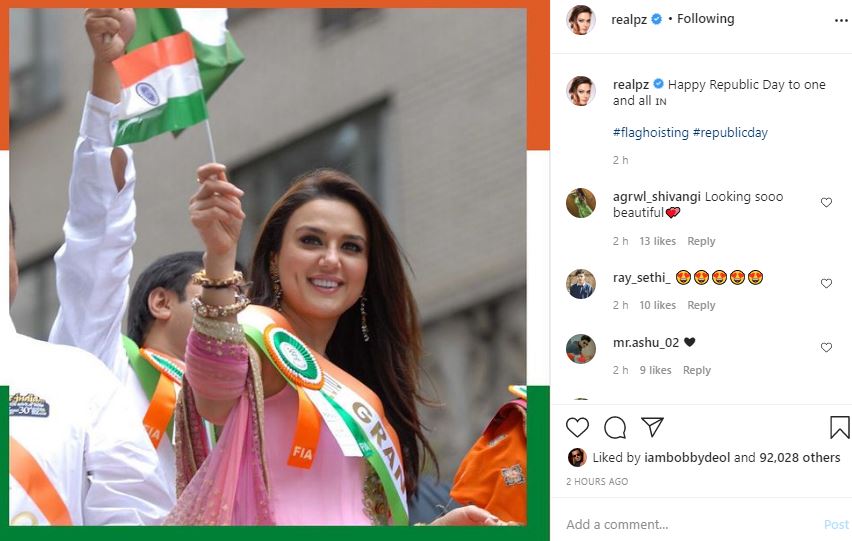 Proudly holding the tri-colour in her hand, Preity Zinta extended greetings on Republic Day by sharing an all smiles picture dressed in traditional attire.
Along with the post, the 'Veer Zaara' star noted, "Happy Republic Day to one and all #flag hoisting #republic day."
Earlier Bollywood celebrities like Amitabh Bachchan, Kangana Ranaut, AR Rahman, among several others had also wished their followers on Instagram and Twitter.
Republic Day is celebrated in India every year on 26 January to commemorate the day the Constitution of the nation came into effect. Though we gained independence on August 15, 1947, nascent India did not have its own laws which were drafted and finally adopted in the year 1950. (ANI)