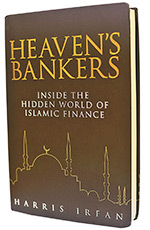 14 January, 2015
Print this article Font size -16+
Harris Irfan has taken us through  a comprehensive journey in Heaven’s Bankers, in which  he writes about the ethos of Sharia Law, its growth especially during the aftermath of the financial crises and its gradual manipulation by traditional bankers reducing it to a mere source of capital than a concept in banking. The book also deals with the classical interaction between Structuring and Sharia experts who blend their thoughts to build a proposition that appeals to die-hard Islamic investors, the gradual realisation of how Islam itself has been arbitraged by bankers and the future of Islamic banking.  Each of these deserve a much better thought. As a traditional financial services person, this book has given me an opportunity to sit back and think this through.
The age-old concept of trade and financing that evolved during the Meccan era was quite forgotten until the financial crises hit us. It then became the focus of all bankers in the mid 2000s.  In their quest to access capital, bankers claimed that Islamic finance was unscathed by the crises due to its principles of fair play.  Given its size and closed operations (quite akin to the Indian banks) Islamic financial institutions could hardly be impacted by the crises, which primarily came about due to over supply, crafty structuring and easy credit flow in interconnected markets. However, the book does highlight the Sukuk Crises of Dubai. This proves that Islamic or no, oversupply and easy credit flow does lead to a crisis.
The relationship between religion and wealth is a complex issue. Most scholars have had divergent views ranging from the fact that religion limits business to the fact that a larger goal of financial equality leads to better business environment. Irfan deals with the concept of fair trade in Islam. However, the views on ‘Riba’ are less liberal among Islamic scholars who include within its definition, all forms of interest payments.
The Church restricts it to usury or income earned in excess of what should be earned. In today’s deep financial markets, where markets price risk, chances of usury in mature markets are limited. During the Meccan times or even today, in most underdeveloped financial markets, pricing could be disproportionate and hence, the concept of usury is still valid. The book talks about the well priced financial markets where the concept of interest should be viewed as more of a fair compensation than Usury, given that lenders and borrowers have deep sources available in the markets.
The book highlights many instances where traditional bankers have resorted to weak structures, which are against the very ethos of Islamic banking just to comply with traditional payoffs.
The most dangerous combination highlighted in the book is the ‘nexus’ of the two big ‘S’ — Structurers and Sharia experts.  The have the magic wand of blending commercial products into the Sharia products with almost a defiant confidence, which attracts Islamic capital.  In the bargain, the very spirit behind Islamic finance, which is to fund genuine trade in a fair manner quite disappears and tilts towards making payoffs in line with traditional products. The examples around Deutsche Bank building its Islamic finance business around structurers who rely on ‘liberal’ Islamic scholars. This nexus would only lead to hypocrisy in funding, which the book alludes to almost in every chapter.
The book ends with the future of Islamic banking and an fair observation from a conservative banker, as to why does the Islamic world not produce its own bankers who may be more closer to Sharia law and those who can interpret it in the right sense.  A more liberal view to ‘Riba’ from covering all forms to interest to instead of just Usury would go a long way in building a robust, asset backed, fair and deep Islamic finance market.
Heaven’s Bankers is a good reference point for contemporary thinkers and Sharia experts to reflect on for a better future for Islamic Finance.
Diwanji is Partner and National leader, Financial services, E&Y
(This story was published in BW | Businessworld Issue Dated 29-12-2014)
Tags assigned to this article:
magazine books bwbooks 7 library afterhours bw-books 7 magazine 29 december 2014 heavens banker harris irfan