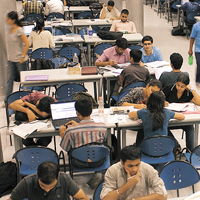 08 November, 2014
Print this article Font size -16+
A few months ago, some banks in India had begun naming and shaming defaulters of educational loans on social media, leading to a huge outrage.
For students caught in a Catch 22 situation of not getting admission in goverment educational institutes, and having to avail huge educational loans to join private universities, Finance Minister P Chidambaram’s announcement of a moratorium for educational loans comes as a big relief.
At the same time, banks that were getting resigned to student loans becoming NPAs have got some relief.
In the vote on account presented on Monday (17 February), the Finance Minister said that the government would take over the liability of outstanding interest on loans availed before March 31, 2009 and still outstanding as on December 31, 2013.  The borrower would have to pay interest for after 1 Jan 2014, he said.
According to Chidambaram, nearly 9 lakh student borrowers will benefit to the tune of approximately Rs 2,600 crore. Chidambaram said that a sum of Rs 2,600 crore will be transferred to the Canara Bank for this purpose.
For banks, borrowers defaulting on educational loans has become a big nightmare and several banks had in recent months begun declining students. This had a spiral impact on admissions.
Not surprisingly, private institutions are cheering as much as students.
Dr H Chaturvedi, Director, BIMTECH, said, “This decision of the Government about moratorium on interest outstanding on education loan is certainly a big relief for students who have to face difficulties due to poor job availability and low salaries as an outcome of economic recession of post-2008.”
He added, “BIMTECH believes that the easy accessibility of educational loans on an interest rate of about 5 per cent will provide the much needed push to the educational aspirations of the lakhs of youngsters in the country. “
Availability of educational loans on easy rates of interest, the industry believes will give the much needed stimulus to the private higher education sector.
AS KR Sekar, Partner in consulting firm, Deloitte Haskins & Sells, said, “The public expenditure on the education sector has no doubt increased in the recent years however a lot needs to be done to bridge the ever increasing demand-supply gap of quality education in the country.”
He added, “This announcement hopefully should encourage our students to fulfill their academic ambitions by utilizing educational loans and in the process enabling the country in improving its GER (Gross Enrollment Ratio) in higher education.”
Tags assigned to this article:
economy education banks othertop2 student loan interim budget