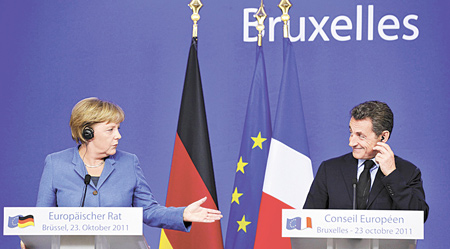 
Ending On A High Note
Sony has decided to end its decade-long relationship with Ericsson. It will buy back the Swedish partner's 50 per cent stake for $1.5 billion. Set up in 2001, Sony Ericsson employs about 7,500 and had nearly 2 per cent of the global cellphone market last year with sales of €6.3 billion. While the deal will help Sony boost its play in the smartphone space, Ericsson hopes to increase its focus on the wireless network business, where it is the largest manufacturer in the world. Sony also hopes to integrate the smartphone business with gaming and tablet offerings.

On Buying Mode
Infosys, India's second largest software services exporter, is on the prowl. Its executive co-chairman Kris Gopalakrishnan has said that the company is looking for buys worth up to $700 million (Rs 3,500 crore). The targets? Those in healthcare, life science, etc. "The size we are looking for is up to 10 per cent of our revenues," says Gopalakrishnan.

Deep Fall
Sesa Goa, an arm of mining giant Vedanta, has reported a 99 per cent fall in net profit (consolidated) to just Rs 1.28 crore for the quarter ended 30 September. The plunge owes it to lower realisation from iron ore and foreign exchange losses. Sesa Goa had a net profit of Rs 385 crore in the July-September quarter of 2010.

Policy Matters
Finally, it is here. At a time when the country faces a slowdown in industrial growth, the Centre this week approved the National Manufacturing Policy, which aims to create 100 million jobs within a decade and increase the share of manufacturing in the GDP to 25 per cent by 2022 from 15-16 per cent now.

On Buying Mode
There was a rat inside, for sure. Smelling danger at the way index futures moved during the Muhurat trade, BSE cancelled all derivatives trades transacted on 26 October. The stock exchange also suspended a member broker.

True Lies
It's a curious case. Indian firms have long been complaining of the US government being stingy about H-1B visas. But last week, the US State Department said specialised H-1B work visas issuances in India increased 24 per cent in 2011. In this case, statistics don't lie.

A New Window
Nokia has launched its first Lumia 800 smartphones — powered by Windows Phone software — in London. With this, the Finnish firm hopes to boost its smartphone lineup. The US is not part of the launch for now, Europe will get it first. It will reach India later this year.

Cutting Down To Size
Japan's largest investment bank Nomura Holdings is tightening the purse strings. Faced with an imminent loss in the July-September quarter, it is scaling down operations in loss-making regions such as Europe where it will cut jobs.

Horizontal Growth
Google is on a shopping spree. It has bought 27 firms during the third quarter for $500 million, taking the total count to 57 firms through the first nine months of the year.