Reliance's Third Refinery on Drawing Board 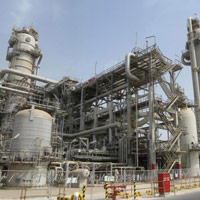 08 November, 2014
Print this article Font size -16+
Mukesh Ambani-controlled Reliance Industries (RIL), India’s largest private company by revenues, is set to build its third refinery of 20 million tonne per annum (MTPA) capacity at Jamanagar in Gujarat to battle it out in the world-league of petroleum giants. The company has twin refineries of 68 MTPA or 1.4 million barrels per day (mbpd) capacity at the Jamnagar complex, the single largest refining location in the world.

The news agency Reuters reported on Saturday (30 August) that the company has sought the approval for a $12.8 billion upgrade to its Jamnagar complex, including a 400,000 barrels per day (bpd) refinery for processing cheap and heavy grades of crude that are increasingly available in Asia.

Sources close to the development confirmed to BW|Businessworld that the proposal has been given to the environment ministry. “Applying earlier would help the company to reduce the time lags in getting approvals. Usually it takes 2-3 years for completing the process for approvals and clearances,” said sources. However, they said that the finalisation of investment has not yet been completed.

RIL is in the process of investing around $12 billion at the Jamnagar complex for building petrochemical plants and cracker units. It moved from a net cash level at the beginning of the year, to a net debt position as it drew down on funding to part finance the expansion of its petrochemical capacities and setting up the new gasification plant and refinery off-gas cracker over the next two to three years.

Of the existing RIL refineries, the first caters to domestic and export markets while the other is dedicated only for exports. The configuration of the refinery gives RIL the technical ability to process almost all grades of crude oil produced and meet the increasingly differentiated and more demanding product specifications. Of the Rs 4.46 lakh crore RIL’s revenue in the last financial year, about 78 per cent revenue share came from refining business.

The refining and marketing segment had a record annual EBIT of Rs 13,220 crore, supported by a Gross Refining Margin (GRM) of averaging $8.1 per a barrel. EBIT increased on account of stable middle distillate cracks, improved light-heavy crude differentials and favourable currency movement. RIL performed significantly better than the benchmark Singapore GRM, which averaged at $5.9 per a barrel during the year. RIL refineries processed 68 MTPA of crude oil, at an operating rate of 110 per cent.

The company’s export revenue has reached $46 billion in the last financial year, contributing 69 per cent of revenues. Of the total export, about $41 billion achieved from sale of refined products.

According to industry experts, it will take at least six years for the refinery to come up --- including 2-3 years for clearances and 3-4 years for construction. Also, the world is at present witnessing excess capacity with the construction of giant refineries in Asia and West Asia, putting pressure on older and lesser sophisticated plants in more mature markets.

But the experts say that this downward cycle will change in 3-4 years. RIL’s new refinery would be planned for riding wave after the sluggish phase. They agree that the company has financial power to back up the investment.

The company had last year sought the approval of the environment ministry to build the third refinery and some polymer units, and to switch the fuel for a 450 megawatt power plant from gas to coal, according to a copy of the proposal obtained by Reuters. The environment ministry wrote back in May this year asking RIL to meet certain conditions in order to secure a green light for the projects. RIL spokesperson declined to comment.