Realty Finally Begins To Sink In 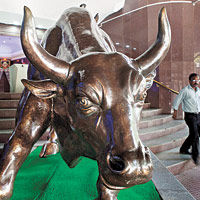 08 November, 2014
Print this article Font size -16+
Until a few months ago, investors were not willing to touch real estate and infrastructure companies even with a barge pole. This sentiment, however, seems to be fast changing. The sector has seen significant inflows over the past six months. The exposure of foreign portfolio investors to real estate companies has gone up from Rs 13,700 crore in December 2013 to Rs 15,300 crore in May 2014. Domestic asset managers have also bumped up their investments in the realty sector from Rs 6,300 crore last July to Rs 14,200 crore currently. The BSE Realty Index has kept pace with broader indices and logged over 42 per cent gains since last year. The sector is likely to perform even better once Reserve Bank starts cutting interest rates. Therefore, it may not be a bad idea for investors to start looking for opportunities in realty sectors.
The only word of caution being — stay away from heavily leveraged developers
— Shailesh Menon

Sore Over More
Mint Road is abuzz with talk of a fifth deputy governor (DG), but it has caused heartburn. It’s not about the credentials of the person who is sought to be inducted — Nachiket Mor, a former executive director at ICICI Bank — but rather about the power structure at RBI. There has always been a “senior most” among the four DGs, but that has never meant anyone having more powers over the rest. A DG as a ‘chief operating officer’ is a new corner office. The unions on their part are worried that ‘career’ RBI officials may lose a chance to move up the ladder if just one DG is to be from the ranks even as a fifth one is added. While out-of-the-box thinking is fine, but to say that it can only come from an ‘outsider’ is pushing the envelope. Governor Raghuram Rajan will do well to encourage such thinking within the cadre as well. Who knows what pops out?
— Raghu Mohan

Startup Love
The Indian IT startup sector is getting attention from industry lobby groups Nasscom and iSpirit (Indian Software Product Industry Roundtable) like never before. Last year, Nasscom, the industry’s older and larger association, launched its ‘10,000 Startups’ initiative. The move was seen as a bid to shake off accusations that Nasscom represented the interests of only major IT services companies. iSpirit, set up last year, has launched ‘BootUPIndia initiative’ to reach out and support startups. While both industry associations diplomatically say they complement each other, startups appear to be enjoying all the attention. Given the challenges and difficulties that most Indian startups face, one can only say more power to anybody who enables them to succeed.
— Venkatesha Babu

Rudderless At The Helm
The government is yet to get its act together as far as public sector undertakings (PSU) are concerned. At present, as many as 34 PSUs either do not have a chairman or have only part-time functionaries at the helm of affairs who do not take interest in the day-to-day running of their companies, leave alone strategy making. In fact, the Public Enterprises Selection Board (PESB), which is tasked with recommending candidates for the post of PSU directors and chairmen, sends as many as 12 names every month to the government. However, these names seem to get stuck at the Central Vigilance Commission. If the government is indeed serious about reviving the economy, it must find a mechanism at the earliest to speed up the clearance process for the appointment of chairman and other functional directors of PSUs. How can PSUs perform better if they remain headless?
— Neeraj Thakur

Pat Comes The Norms
The Indian Patent Office’s revised draft guidelines are a welcome move as they seek to bring Indian intellectual property rules into conformity with global standards. Besides a spate of litigations between innovator companies, generic makers and the government in recent times, there has also been an increase in the workload of Indian patent offices — they granted nearly 1,300 patents between 2011 and 2013, as against 970 between 2007 and 2011. Moreover, the Indian IP office has also been functioning as an International Search Authority and International Preliminary Examining Authority since October 2013. Still, there is a need to appoint qualified patent professionals as well as ensure speedy decision-making and more clarity on controversial sections which talks about evergreening of patents.
— P.B. Jayakumar

The Power Of Many
Power minister Piyush Goyal’s proposal on merging the smaller power PSUs into bigger ones deserves to be lauded. Specifically, the proposal revolves around the possibility of merging all the smaller hydro PSUs such as SJVN, THDC and NEEPCO into National Hydro Power Corporation (NHPC) and creating a mega entity. The proposal also entails transfer of  NTPC’s  hydro power assets to NHPC, as well as reverse transfer of over 4,000 MW of thermal assets controlled by hydro players to NTPC. The creation of mega PSU entities will allow for efficient pooling of resources and management. In the era of liberalisation, the public sector should be competing with the private sector, and not with its brethren in the public sector, as was the norm in the controlled economy.
— Neeraj Thakur

The Ride To Recovery?
The twin launches of the sedan Zest and the Bolt hatchback are a bold attempt by Tata Motors to boost its sagging fortunes in the domestic passenger car market. The latest offerings are, without doubt, far superior to anything that the company has made in the domestic market so far. While all domestic car manufacturers have struggled over the past two years owing to the economic lump, Tata Motors has been the worst-hit. The company has managed to sell just 6,400 cars per month on average. Analysts expect the feature-laden Zest and the Bolt to sell between 10,000 and 15,000 units per month. In case these numbers do not materialise, the company’s passenger car unit could find its troubles that started with the failure of the Nano
assuming ever bigger proportions.  — Sachin Dave