Realty Bites For The Common Man 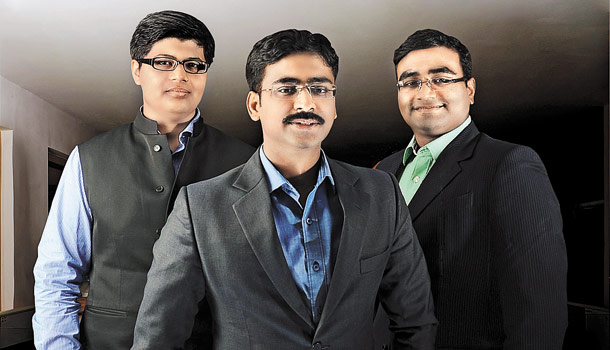 08 November, 2014
Print this article Font size -16+
Can a Google-like strategy of giving away a service for free to the end user and monetising the data collected unobtrusively, work in the super-competitive Indian real estate sector? maxHeap Technologies, which runs www.commonfloor.com, believes it can.

Run by three friends, all aged 30, Commonfloor claims to be more than just a website for real estate listing and classifieds. Commonfloor’s USP is that it offers a software platform on the Internet for apartment owners to manage, interact, streamline and organise the community’s management and accounting processes. The software leverages the Internet to enable discussion of issues and sharing of information, thereby enabling greater efficiency and transparency in operations.

With 56,000 apartment communities and their resident welfare associations (RWA) already using Commonfloor’s free software, the question that comes to mind is: how does it make money?

Commonfloor acts as a sourcing and marketing channel for property agents, developers, service providers, brands and businesses to offer their services on one platform to the target audience in, what it claims to be, a non-intrusive manner. “We don’t focus on individual houses or commercial properties. We have a sharp focus on the residential apartment-end of the market. At an average of 100 apartments in each of the 56,000 apartment complexes where our software is used, at any point a minimum of five million apartment owners use our software. We get to know first when an apartment is being rented out or on sale. We are a consumer-product company, not a property-listing portal. Our aim is to be a one-stop destination for home-seekers, residents, association members and service providers,” says CEO Sumit Jain.
Jain founded and runs the company along with his batchmate from the Indian Institute of Technology, Roorkee, Lalit Mangal, and Vikas Malpani, whom they met through common friends. The premise behind the business model of the company is that it is free for RWAs, but paid for businesses looking to serve them. It also rents out ad space on its website, and gets a commission from any deals via those advertisements.

Explaining the genesis of Commonfloor, Jain says he faced a very common problem that many people living in apartment communities will readily identify with: “Even after living in such communities for long, we realised that there was hardly any interaction among neighbours — some families were not even known to us. This made us think of a solution that could bring owners, buyers and association committee members together,” he explains.

The software provides a management tool to exchange messages, categorise members’ database, add vendors and manage the finances of an RWA. “It’s complete ERP (enterprise resource planning) for apartment communities and it is free. Given that maintenance charges are levied to look after things like maintenance of common areas, security, etc...annual budgets of some large gated communities can be in excess of Rs 10 crore. Each member of the RWA wants to ensure that everything is dealt with in an open and transparent manner, and that is where our software comes in, helping them manage that effectively,” says Mangal, Commonfloor’s technology director.

So what about competition from other property portals like Magicbricks (promoted by media company Bennett, Coleman and Co.), Sulekha or Indiaproperty? “I am not concerned. Is creating a Microsoft Word or Excel difficult or impossible? Not at all. But creating the Microsoft ecosystem is very, very difficult. The fact that we are already in several thousand apartment complexes with several million users means there is an early-mover advantage that is hard to replicate,” says Jain. To stay ahead of the competition, Mangal says they keep adding features to the company website.

What about RWAs using Google or Yahoo groups to run their operations effectively? The founders say the company has four distinct advantages over them. One is that in those groups a user is just an email ID, unlike in Commonfloor where the member’s entire profile is provided, and the directory of the entire neighbourhood is available. This provides context to communication as the member’s block number, apartment number and whether he/she is a tenant or an owner can be seen. “Second, we provide mobile enablement. By that, say a message has to be sent to Block C residents at 9 am about the water tank being cleaned, this message can be scheduled, unlike in the competing offerings (websites). This message can be customised, scheduled and only relevant people will receive it,” says Mangal.
Commonfloor’s software enables formation of sub-groups with common interests within RWAs, such as a collection of cycling enthusiasts or parents of children who attend a particular school. This also enables the property manager to track issues and maintain expense accounts.

The company expects to post in excess of Rs 10 crore in revenues this year, which is a massive jump from the Rs 2 crore revenues that it posted in 2011-12, driven by a large number of RWAs using Commonfloor and service providers pumping in more money after realising the vast potential of the database that they can have access to.

Jain says the company is profitable and has raised money from Accel Partners and Tiger Global, without disclosing how much they have invested. Mangal says the goal is to become the leading online real estate destination in India.

“The money we have raised and are likely to raise will be deployed to build a strong organisation, hire talent and further improve our product and market it,” adds Jain. With the proliferation of housing projects across the country, Commonfloor has reason to be upbeat.