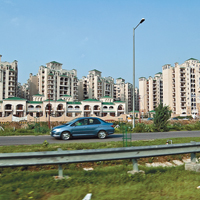 08 November, 2014
Print this article Font size -16+
Anuj Puri, Chairman & Country Head, Jones Lang LaSalle India
The issues pertaining to real estate are deeper and more inherent than those pertaining to consumer durables or the automobile industry. Resolving these issues involves fiscal adjustments to key real estate-linked policies and may even require constitutional amendments. It was therefore self-evident that the current VOA budget would not hold anything of real consequence in store for the real estate sector. That said, the support extended to the residential sector in the affordable segment is positive, and will hopefully help revive construction activity beyond the leading 3-4 metropolitan cities.
With elections in sight, affordable housing will definitely continue to be an area of focus. We expect more developers to enter into the budget homes segment in order to take advantage of tax incentives, and also the greater demand-supply mismatch there. However, the key to success of such schemes remains the timely and transparent implementation of the announced scheme. It could come under the ambit of the central government umbrella schemes such as JNNURM and RAY through incentive-linked targets allocated to each state or urban municipality. These umbrella schemes have great power in terms of influencing action by states.
In terms of interest rates, the finance minister has given a cursory nod to the present level of inflation, making a case for a cut in interest rates to revive growth across the interest-rate sensitive sectors. However, this is in conflict with the communication we have been receiving from the monetary authorities over the past few weeks. The market is expecting the next policy meeting in April to be a non-event.
We were expecting the government to give some roadmap on the enactment of GST, which did not happen. This is disappointing. Meanwhile, the Land Acquisition Bill continues to remain a cause of concern for the real estate community because of issues such as inflated land cost and the complexity involved in resettlement of original inhabitants. These issues, which came to light in the version that was released in late 2013, still need to be addressed. The sector was hoping that the government would provide some respite from the stringent measures of adoption.
Tags assigned to this article:
real estate anuj puri interim budget jones lang la salle