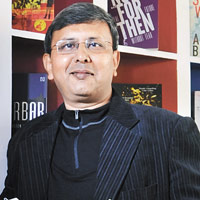 08 November, 2014
Print this article Font size -16+
Publishing and bookselling are seeing the best of times and the worst of times now — certainly, we are living in times interesting enough to satisfy Chinese proverbs. Mid-2013 will see (after regulatory scrutiny) the merger of Penguin Books and Random House — two of the big four in the trade (consumer) side of the industry. It is anybody’s guess whether the industry will see further consolidation, though speculation is rife about other mergers or buyouts featuring Hachette, HarperCollins, Simon & Schuster, and Pan Macmillan. More importantly for India, we will see the launch of the two giants — Amazon and Google — who along with existing domestic giant Flipkart (which has become India’s largest book retailer) and to some extent Apple — with its iTunes store going live in this market — can be expected to transform the bookselling landscape.
On the genre side, the business book remains the airport blockbuster, but we have seen quite a few other genres either break out or slowly amass a critical body of work that promises bestsellers to come. ‘Mommy-porn’ sensation E.L. James’s erotic romance Fifty Shades Of Grey series have seen more clones with Sylvia Day (Crossfire series, Georgian series, etc.), Marina Anderson (The Haven Of Obedience, Forbidden Desires), and so on, but whether they will rule the roost beyond mid-2013 remains to be seen.
Litfests have now occupied every geographical, and architectural, backdrop from desert to backwater, from seas to mountains, from palaces to tents, and even a mobile one aboard the Indian Railways. That leaves just airplanes and treehouses as possible festival venues! That said, book marketing will — with the e-dimension — have to adopt new strategies moving beyond the now passé and utterly useless book launch. So, here are the five things to expect in 2013.
E-books Will Take Off
Well, it is finally here. After the tentative testing of data feeds last year, 2013 will see all the big players actively selling e-books — whether it is Amazon’s e-store, Apple’s iTunes, Google Play or the homegrown Flipkart-Flyte. In India, it won’t be about the device. I have always maintained that this is not a country where the average reader will pay Rs 7,000-plus to buy a device and then pay for a book when she can get the book at the same price in print. But with large-screen smartphones and tablets, we have convergence, and we should see the e-book offtake growing.
The High Street Will Need To Reinvent
Online book sales are going to get bigger and it’s not just about discounts. Just like the West, we are seeing the high street collapsing, and readers — bereft of good browsing and informed shop floor interface — will move online, especially since most stores confine themselves to standard bestsellers, due to lack of space. In India, with our low prices, it was always going to be difficult to make profits in high rental malls.  And now, as sales of brick-and-mortar book stores are falling, with an increase in online sales, the high street needs to reinvent itself to survive.
Campus Romance Moves From Trend To Fad
I’m going out on a limb to predict this, but it is my firm belief that once the novelty has worn off and the sheer number of titles makes differentiation difficult, this will (like the diet books and vampire fiction) become a sedate genre with the occasional breakout. Given its low price point, it will be difficult to sustain this as a major publishing stream.
Crime On A Comeback
After Stieg Larsson and the Scandinavian crime renaissance, we are slowly but steadily seeing a resurgence in crime or thriller writing. Watch out for Keigo Higashino’s Salvation For A Saint, Gillian Flynn’s Gone Girl as well as follow-ups to series begun. The female detective is now a definite sub-strand (Swati Kaushal’s Niki Marwah, Kalpana Swaminathan’s Lalli, Smita Jain’s Kasthuri Kumar) though the male detective (Anita Nair’s Inspector Gowda, Shamini Flint’s Inspector Singh, Tarquin Hall’s Vish Puri) still holds his own.
Historical And Neo-mythological Get Bigger
The neo-mythological (whether written as mythological retelling or alternate history or fantasy), which has emerged as the new supergenre following the success of Amish Tripathi’s Shiva Trilogy, will also see follow-ups. From Krishna Udayasankar’s Firewright, which follows Govinda, book 1 of The Aryavarta Chronicles, to Rajiv Menon’s Thundergod — The Ascendance of Indra, Sangeeta Bahadur’s Jaal (Book 1 of the Kaal Trilogy), Ashok Banker’s Mahabharata and Ramayana retellings and, of course, Tripathi’s much awaited conclusion, The Oath Of The Vayuputras. The historical genre  is a recent entrant where Indian subjects are concerned, but it will see some blockbusters including The Serpent’s Tooth, the fifth in The Empire Of The Moghul series by Alex Rutherford, and a great debut with Chandragupta Maurya by Adity Kay.
Despite the inevitable churn that we will see, 2013 is going to be a great year to look forward to in terms of books; I will close with some business biggies to look forward to. Subroto Bagchi, Malcolm Gladwell and Rama Bijapurkar will be back with new blockbusters, while Start-up Sutra by Rohit Prasad is the Indian trade business debut I am picking.
Internationally, the one apparent trend in business book publishing is digital and online; so, watch out also for The New Digital Age: Reshaping The Future Of People, Nations And Businesses by Google’s executive chairman Eric Schmidt, Big Data: A Revolution That Will Transform How We Live, Work And Think by Viktor Mayer-Schoenberger and Kenneth Cukier, and The Twitter Story by Nick Bilton, which many of you might aptly choose to read e-versions of.
Happy reading!
Founding managing director of Hachette India and former CEO and president of Penguin Books
(This story was published in Businessworld Issue Dated 14-01-2013)
Tags assigned to this article:
magazine penguin mystery crime harpercollins bwbooks 7 hachette amazon history random house mythology e books amish tripathi pan macmillan simon and schuster steig larsson book publishing tribhuwan sharma thomas abraham what to expect in 2013 magazine 14 january 2013 ashok banker trends in publishing