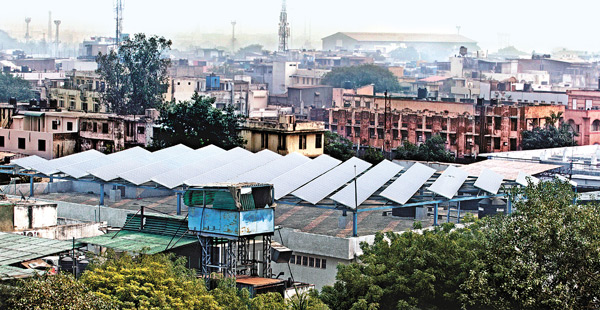 Lack of financing is a major hurdle. “I have gone to SBI, IREDA (Indian Renewable Energy Development Agency) and so on to get funding for my customers... But banks do not get any revenue from this,” says Rajeev Agarwal, founder of Chennai-based Ardor Green Solar & Wind. Costs can be high. Ardor, for instance, has a Rs-7-lakh system that can also run air conditioners. Despite 30 per cent subsidy, it would still cost Rs 5 lakh. Incidentally, the Reserve Bank of India has included loans to individuals setting up off-grid solar (and non-solar) projects under priority sector lending.
Agarwal’s biggest success story is Jayaraj Chandran, who started with a solar water heater. Chandran saved up and bought the Rs-7-lakh system in March this year. His testimonial on Ardor’s website says he has “escaped from the clutches of very poor grid supply”.
For Sunny Days Ahead
States, social enterprises and companies are making forays into rooftop solar. Gujarat has installed solar capacity of 654.8 MW — 66.8 per cent of the national capacity. It is now looking beyond large-scale solar units to smaller decentralised ones, and has allowed residences to sell from rooftop units to the grid.
But challenges abound. Rooftop solar power cannot substitute conventional power. Limited space, ownership of panels are just some of the other issues. But KPMG’s Kamath feels that with grid parity nearing, the economically viable rooftop market could grow to 4,000 MW over the next five years. He expects the price of generating solar power to decline 5-7 per cent per annum, provided there is economy of scale in equipment manufacturing, efficient technology and low-cost manufacturing locations.
Even though the overall situation is tough, some big companies have entered the sector. Lanco Solar set up its first rooftop project on  Parliament House. It has another in Delhi’s Safdarjung airport, and atop government buildings and cement plants. Their current year’s target is 10 MW. “Government, commercial and industrial units are interesting for us,” says V. Saibaba, CEO of Lanco Solar.
Grid-interactive rooftop systems are already an integral portion of the solar market in countries such as Japan, Spain and Germany (80 per cent). In India, the grim power situation is reason enough to push for rooftop solar harnessing. KPMG’ report, The Rising Sun, says power demand will push our energy import dependence from 30 per cent now to 59 per cent by 2032. Coal shortage is expected to increase imports four times in the next five years. By 2030, the share of oil imports could increase 90 per cent.
The increase in power demand is what will spur the rooftop solar market, feels Lanco’s Saibaba. “If we have to realise a GDP growth of 7-8 per cent, we have to add at least 100,000 MW in the next five years. You have to decentralise power generation. Fortunately, three-fourths of India has excellent solar radiation of almost 5-6 hours.”
Bring on the sun!
yashodhara(dot)dasgupta(at)abp(dot)in
(This story was published in Businessworld Issue Dated 12-11-2012)
Tags assigned to this article:
magazine environment power energy ireda lanco solar energy yashodhara dasgupta electricity renewable energy bivash banerjee ritesh sharma magazine 12 november 2012 rural electrification mgp rooftop solar energy