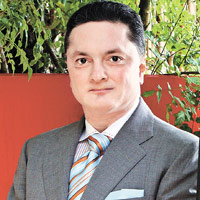 "We had a few issues in the past in our business strategies and are now in the process of fixing them", Gautam Hari Singhania, chairman and managing director told Businessworld.

Sanjay Behl, former head of brand and marketing and CEO of Reliance DTH & IPTV of the Reliance ADA Group, has taken over as the CEO of textile and apparel businesses. The CEO post is newly created for Behl and he will directly report to Singhania.

Raymond, which grew its business from Rs 2617 crore in 2009-10 to Rs 4143 crore in 2012-13, had a sluggish growth in its profits during the period. Net profit for 2012-13 was Rs 28.7 crore compared to Rs155.8 crore in the previous year. Its textile business had seen volume growth, but margins were flat in the last few years. Its foray into denim business through a joint venture with the Belgian company UCO failed to deliver the promises. The 88-year old company also relocated its manufacturing facilities in Thane in recent past to Jalgaon and Vapi.

"The full year 2012-13 had been an year of organisational consolidation and has provided us with a platform for a strong bounce back in profitablity", Shivkumar had said in an analyst-call for Q4, 2012-13.