Mumbai (Maharashtra) [India], October 29 (ANI): Embracing the new normal, actors Randeep Hooda and Ileana D'Cruz took up virtual script reading session for their upcoming film 'Unfair N Lovely' on Thursday.
The actors were seen reading script over a video call amid the ongoing fear of coronavirus spread.
Taking it to Twitter, Hooda wrote, "Virtual script reading before the shoot begins. Hello new normal!" along with pictures of both the actors. 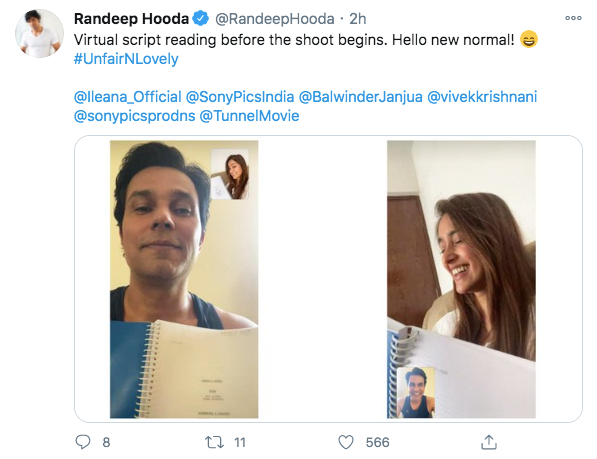 Similarly, Ileana shared her excitement on the platform with the caption, "Virtual Script readings be like...New Normal, new experiences, but the same old excitement & thrill at the start of something new!"
On Thursday, the 'Highway' actor underwent COVID-19 test before beginning the shoot for the film post lockdown.
Both Hooda and D'Cruz had announced the film on their Instagram accounts by sharing a picture each of themselves and explaining about how the film will focus on the beauty standards based on skin colour.
The film will be helmed by Balwinder Singh under the banner of Sony Pictures Film India. (ANI)