Ranbir Kapoor, Shraddha Kapoor's untitled next to release on Holi 2022

Ranbir Kapoor, Shraddha Kapoor's untitled next to release on Holi 2022

New Delhi [India], February 19 (ANI): Get ready to witness another fresh pairing on screen! Bollywood actors Ranbir Kapoor and Shraddha Kapoor, who will share screen space for the first time in director Luv Ranjan's yet-untitled next, will soon treat the movie buffs with the upcoming film, the release date of which has been revealed.
Indian film critic and trade analyst Taran Adarsh shared the release date of the movie, which is slated to hit the theatres on the occasion of Holi, next year (March 18, 2022).
He tweeted, "RANBIR - SHRADDHA: RELEASE DATE CONFIRMED... #LuvRanjan's next film - not titled yet - to release on 18 March 2022 [#Holi]... Stars #RanbirKapoor and #ShraddhaKapoor... Shooting has commenced in #Delhi... Produced by Luv Ranjan and Ankur Garg... Bhushan Kumar presentation." 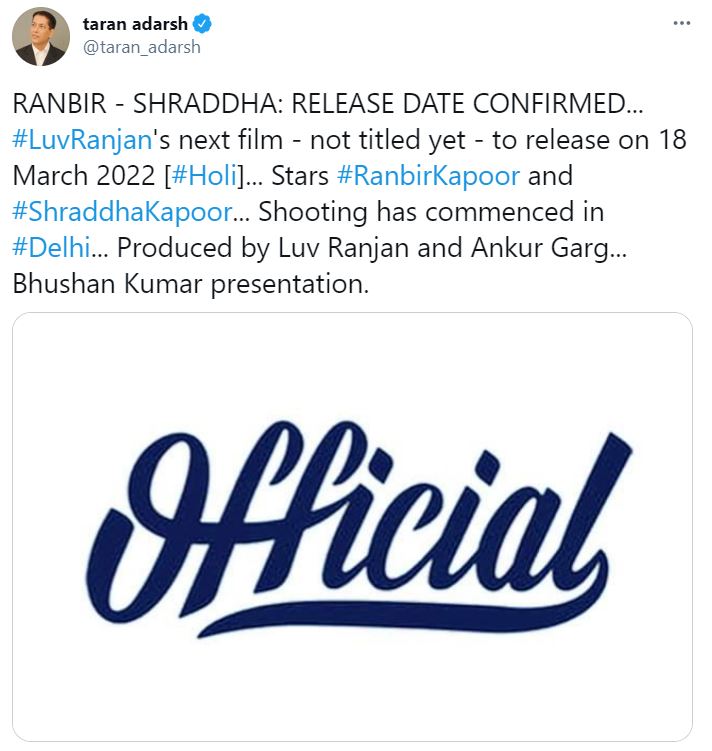 The shooting of the film has already commenced in Delhi. The yet-untitled movie was announced in December 2019 and was earlier slated to release in March this year. However, the novel coronavirus pandemic deferred the plans.
The upcoming film marks the first-ever collaboration of Ranbir and Shraddha with Luv, who has earlier helmed popular films like 'Pyaar Ka Punchnama' and 'Sonu Ke Titu Ki Sweety'.
The yet-untitled film, bankrolled by Luv and Ankur Garg's Luv Films and presented by T-Series' Bhushan Kumar, will also star Dimple Kapadia and Boney Kapoor.
The film will reportedly see Dimple essaying the role of Ranbir's mother, while Boney will play the role of Ranbir's father.
Apart from the upcoming film, Ranbir, who was last seen in Bollywood actor Sanjay Dutt's biopic titled 'Sanju', will be next seen in Karan Malhotra's directorial 'Shamshera'. He will also star in 'Animal', being helmed by Sandeep Reddy Vanga.
Ranbir will also feature in 'Brahmastra', which also stars his rumoured girlfriend Alia Bhatt. Ayan Mukherji's directorial 'Brahmastra' also stars megastar Amitabh Bachchan.
Shraddha, who was last seen opposite Tiger Shroff in 'Baaghi 3', has reportedly signed a three-film franchise based on the tele-series 'Naagin', to be produced by Nikhil Dwivedi. (ANI)