New Delhi [India], February 15 (ANI): Bollywood actors Rajkummar Rao and Janhvi Kapoor's horror-comedy, which was earlier titled 'Roohi Afzana', has got a new title. The upcoming film has now been named 'Roohi'.
The trailer of the film will be out tomorrow and the movie is set to have a theatrical release on March 11, this year. Indian film critic and trade analyst Taran Adarsh shared the news on his Twitter handle.
He tweeted, "RAJKUMMAR RAO - JANHVI KAPOOR... #RajkummarRao - #JanhviKapoor starrer gets a new title: #Roohi... Release date: 11 March 2021... Trailer tomorrow... Costars #VarunSharma... Directed by Hardik Mehta... Produced by Dinesh Vijan, Mrighdeep Singh Lamba... #Jio Studios presentation." 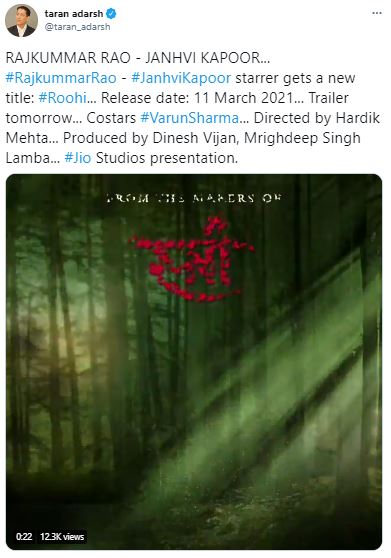 Taran Adarsh also shared a video, which reveals the vibe of the horror-comedy, which ends with a picture that shows a bride and two grooms. While one can guess the grooms to be Rajkummar and Varun, the look of Janhvi is kept under wraps.
The film, which also stars 'Fukrey' fame actor Varun Sharma, marks the first-ever collaboration of Rajkummar and Janhvi. Rajkummar and Varun have earlier shared screen space in 2015 release 'Dolly Ki Doli'.
The forthcoming horror-comedy is being helmed by Hardik Mehta. A Jio Studios Presentation, 'Roohi' is being produced by Dinesh Vijan and Mrighdeep Singh Lamba.
'Roohi', which is the first major Bollywood release post lockdown, was set to hit the cinemas in the first week of June last year, but the film had to be postponed due to the ongoing coronavirus pandemic.
The upcoming horror-comedy will also become the first film to arrive in theatres after the Ministry of Information and Broadcasting allowed cinema halls nationwide to operate at full capacity from February 1 with COVID-19 safety protocols put in place.
The film will reportedly tell the story of a ghost who abducts brides on their honeymoon. It is based on the lines of the 2018 hit film 'Stree' which featured Shraddha Kapoor and Rajkummar Rao in lead roles. (ANI)