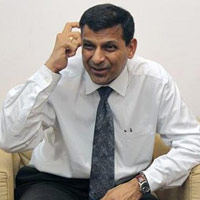 08 November, 2014
Print this article Font size -16+
Reserve Bank of India (RBI) governor Raghuram Rajan has set himself a target of lowering consumer inflation and is even ready to raise rates to achieve it, risking friction with the new government if he is seen as overstepping.

Rajan, well known within the RBI for pragmatism, now must work with the government of Prime Minister Narendra Modi, which understands the need for – and wants – lower inflation, but doesn't see the value in hard targets.

The governor's people skills may be tested when Finance Minister Arun Jaitley attends Sunday's RBI board meeting in Delhi, representing a government that is equally keen on boosting an economy that has just had two consecutive years of sub-5 percent growth.

The meeting comes after Rajan, the star economist appointed by the previous Congress government, surprised markets after the RBI's policy review on Tuesday by establishing in clear terms that the RBI would get consumer inflation down to 8 percent by January 2015 and 6 percent one year later.

Officials familiar with RBI's stance warn that Rajan is committed to those goals, even if he has yet to receive explicit political backing.

"If we don't get support from the government, then we have to hit it harder," a senior official told Reuters.

"If inflation doesn't come down as projected and supply-side measures are not taken, interest rates may need to go up to reach the 6 percent goal."

No Easy Feat
Meeting that target won't be an easy feat in a country with unpredictable monsoon rains and dependent on oil imports. The consumer price index spiked to 11.2 percent in November before three interest rate hikes from Rajan helped bring inflation down to 7.3 per cent in June.

Rajan will need to tread carefully in pushing the government into action, according to analysts. Although the RBI is not statutorily independent from the finance ministry it has long enjoyed wide latitude in policy-making.

But failure to act on Rajan's pledge to bring down inflation would hurt the central bank's credibility.

Rajan has already displayed some of his pragmatic streak by cutting the mandatory bond reserve requirements for lenders in a bid to help the government accomplish its goal of unleashing credit.

"It is a credibility issue," said a second official familiar with the central bank's policy stance.

"The government is RBI's owner, so the RBI has to consult with the government on its executive decisions," he said, adding: "Controlling inflation is the primary responsibility of the central bank and it is a matter of convincing the government that doing so is for the interest of the government and the country."

Limited Action So Far
Jaitley, in public comments, has acknowledged the importance of bringing down inflation, and said he is committed to working with the RBI while taking limited action such as curbing hoarding of food staples.

But the Modi government has yet to unveil any substantial reforms even after Jaitley surprised markets by committing to meet an ambitious fiscal deficit target of 4.1 percent of gross domestic product set by the previous Congress-led government.[ID:nL4N0QA2ED]

Nor has the government yet endorsed the inflation targets first unveiled in January by a central bank panel led by deputy governor Urjit Patel.

"The finance ministry will not speak about any particular target for inflation, but will work in tandem with the RBI to meet the goal set by the Urjit Patel committee," said a senior ministry official.

With less than 1-1/2 years until January 2016 - when inflation is supposed to be maximum 6 percent - analysts warn the government must work faster to tackle the supply bottlenecks and food production problems that have so long burdened millions of India's poor.

Meeting the January 2016 target will be "a big challenge as that will need food inflation to fall below 6 percent," said Soumya Kanti Ghosh, chief economic adviser at State Bank of India, the country's largest lender.