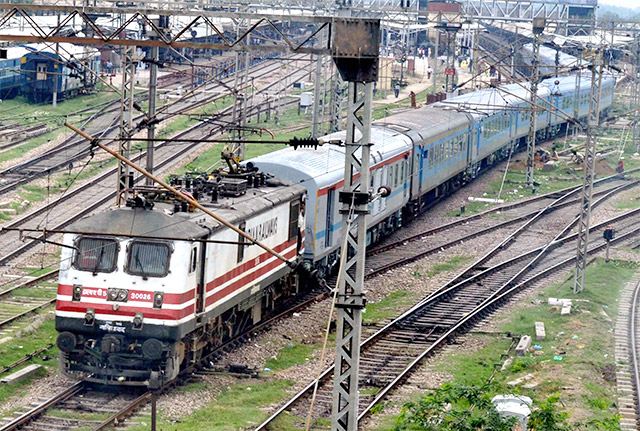 10 March, 2015
Print this article Font size -16+
Railway Minister Suresh Prabhu came up with a budget on Thursday (26 February) that was described as "futuristic and development- oriented" reflecting the National Government Alliance (NDA) government's priorities. Prime Minister Narendra Modi termed it as "futuristic" and "passenger centric" and said it lays out a clear roadmap to make the national transporter the key driver of the country's economic growth.

Hailed as "pragmatic and practical" by supporters, the budget was slammed  by opposition for not providing sops to passengers.  On hintersight, it was a budget that was more practical than visionary.

Railway Minister Suresh Prabhu on Thursday (26 February) said there would be no increase in passenger fares and proposed an investment of 850,000 crore ($137 billion) over the next five years to modernise the rail network. The Opposition was not happy with Prabhu for keeping the fares same. They said a fare cut had been called for given the falling prices of diesel internationally.

Presenting the Railway Budget 2015-16 in the Lok Sabha, Prabhu said Indian Railways, the world's fourth-largest rail network, will go through a transformation through a number of measures.

The government will increase some freight rates in the 2015-16 fiscal year.

Prabhu made adjustments in freight rates that exempted salt but would hike rates on carriage of cement, coal and coke, iron or steel and petroleum products.

The budget also revised the commodity classification and distance slabs for carriage of commodities that can raise freight rates up to 10 per cent in some of the items.

The minister said that given the importance of rail travel for Indians, Railways will increase its daily passenger carrying capacity from 21 million to 30 million.

The minister said Railways will introduce the "Operation Five-Minute" scheme to ensure ticketless passengers get a regular ticket within five minutes.

Jaijit Bhattacharya, Partner, Infrastructure and Government Services, KPMG India, said: The Rail budget has all the right articulations. We welcome the greater role of private sector in station operation, railway electrification and other activities. The aim to have an Operating Ratio of 88.8% is also very welcome and forward looking. However, one would like to see the details of how Railways will be able to manage this target. Also, while it has been mentioned that there will be no hike in railway passenger fares, it appears that the fare reduction due to Fuel Adjustment Component will not be applied.

Other passenger enhancement focussed initiatives, safety and modernization of railways, including introduction of high speed railways  is welcome.

Excellent initiatives in Ease of Doing Business with Railways in the Rail budget. If the initiatives are implemented, it will improve on the private sector trust and hence help in attracting private sector participation in railways.

Vinay Khattar, Associate Director & Head of Research, Edelweiss, says the Railway Budget 2015-16 provides a clear road map for 5 years with 52 per cent higher spending for FY16. Focus of the budget was on making railways self sustainable, decentralisation of authority for quick decision making and improving efficiency. Overall we believe it was a positive budget.

The good points according to him were:
Making Railways self sustainable: Proposed operating ratio of 88.5 percent for FY16 Vs 91.8 percent FY15
Pension Fund and Multilateral banks have shown interest. Also budget has proposed for seperate finance cell for project funding decision.
Decentralisation of authority for quick decision making :  Station Redevelopment - Zonal and Divisional offices be empowered for quicker decision making. Decisions to be made at General Manager level for clearing projects

Buying of electricity through bidding process will result in cost savings of Rs 3000 crore in next few years
No hike in passenger fare rates
Budget also focused on Swach railway (in-line with Swach Bharat) by introducing new department for the same.

Cleanliness Campaign
A cleanliness campaign is being launched for trains and stations.

So far Railways has replaced the existing toilets with 17,388 bio toilets. This year it intends to replace another 17,000 toilets.

The minister told travellers: "Railways is your travelling home, please keep it clean."

E-catering will be launched for select meals from an array of choices, ordering food through IRCTC websites at the time of booking tickets and integrating best food chains into the project.

In technology initiatives, open wi-fi will be available at 400 railway stations.

The minister proposed to introduce an "SMS Alert" service to inform passengers in advance the updated arrival and departure time of trains.

The Defence Travel System has been developed for elimination of warrants to make travel easier for soldiers. This facility has been commissioned in 600 locations out of about 2,000 locations.

More general class coaches will be added in a number of trains, while more air-conditioned EMU services are planned for the Mumbai suburban section.

Preventing Accidents
Railways has proposed to install Train Protection Warning System and Train Collision Avoidance System on select routes. To prevent fire in coaches and also prevent coaches from climbing over each other during accidents, the Research, Design and Standards Organisation (RDSO) has been asked to develop new systems.

To curb derailments, modern track structure consisting of sleepers and heavier rails are being used while carrying out primary track renewals. Better welding techniques would also be promoted, and analogue machines for testing of rails are being replaced with digital type machines.

New University
Prabhu said that a systematic human resource audit would be undertaken to prepare the workforce of Indian Railways for the future and for enhancing organizational performance. He saaid Railways is in the process of setting up a full-fledged Railway University during 2015-16.

No Privatisation
Against the backdrop of talk of privatisation, the minister said Railways will continue to be a precious national asset and people of India will always own Railways.

In the hour-long speech, Prabhu unveiled the thrust areas to make Railways the prime mover of economy again.

Outlining the budget estimates for the coming year, he proposed a plan outlay of Rs 100,011 crore, an increase of 52 per cent over revised estimate of 2014-15. Passenger earnings growth has been pegged at 16.7 per cent and earnings target budgeted at Rs 50,175 crore.

The Ministry of Finance has communicated a gross budgetary support of Rs 40,000 crore for Railways' annual plan.

Prabhu said over the next five years, Railways envisages an investment of Rs 8.5 lakh crore for which a broad indicative investment plan has been prepared.

"But the scale of investment needs is such that it will require us to seek multiple sources of funding. We will tap other sources of finance. Multilateral development banks and pension funds have expressed keen interest in financing new investments," he said.

"They seek sources of predictable and recurring revenue, which we can provide through the issuance of long debt instruments to fund revenue-generating railway projects," the minister added.

Train Speed
The speed of trains connecting major metro cities would be increased up to 200 kilometres per hour on nine select railway corridors in a bid to reduce travel time.

"The speed of nine railway corridors will be increased from the existing 110 and 130 km per hour to 160 and 200 km per hour respectively so that inter-metro journeys like Delhi-Kolkata and Delhi-Mumbai can be completed overnight," Prabhu said.

Efforts would continue to "pursue with vigour" the special projects like high-speed rail (bullet train) between Mumbai and Ahmedabad, he said.

The feasibility study for this was in an advanced stage and was expected by the middle of this year.

Regarding other high-speed routes on the diamond quadrilateral, he said studies were being commissioned.

He also proposed to increase average speed of freight trains, both in empty and loaded conditions.