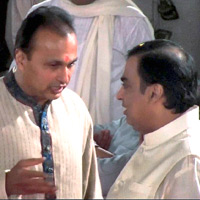 RIL has made these investments, totalling over Rs 800 crore, mostly in the Fixed Maturity Plans and other debt schemes of Reliance Mutual Fund, market sources said.

Incidentally, on Tuesday, 2 April 2013, RIL and Anil Ambani group announced their first business partnership since a bitter family split in 2005. The two groups have agreed to share optic fibre cables and other telecom infrastructure including telecommunications towers for their respective ventures, Reliance Jio Infocomm and RCOM in a Rs 1,200-crore deal.

The two groups, which about three years ago had scrapped a non-compete agreement between them, have now also agreed for a comprehensive framework of business cooperation.

While the Rs 1,200 crore does not do much to reduce the net debt of Rs 37,360 crore on the books of RCom as of end-December 2012. What it does  mean is that it will get a steady stream of income once RJTIL starts broadband wireless services later this year. Considering that this is termed as the first in a series of business cooperation for utilising the existing and future infrastructure of both companies, there could be more such deals in the not-too-distant future.

RIL's investment in Reliance MF schemes, which has been made over a period of last eight months, comes as a clear departure of the oil-to-retail conglomerate's earlier stance of parking surplus funds into almost all the mutual funds, expect on those run by the Anil Ambani-led group.

At the end of fiscal 2011-12 ended March 31, 2012, RIL had invested over Rs 8,700 crore in various mutual fund schemes, including Fixed Maturity Plans (FMPs), but they did not include any scheme of Reliance MF.

In contrast, RIL has always figured prominently in the stock portfolios of various schemes of Reliance Mutual Fund.

At least 13 schemes of Reliance Mutual Fund had RIL as one of the biggest stock in their respective portfolios as on March 31, 2012 and together these funds held RIL shares worth well above Rs 500 crore.

According to market sources, there was a clear change in RIL's investment strategy in the last fiscal 2012-13 in terms of deployment of excess cash in mutual funds.

RIL holds one of the biggest cash balance among all the corporates in the country.

It had cash and cash equivalent of Rs 80,962 crore (about USD 15 billion) as on December 31, 2012. A large portion of these funds are parked in bank deposits, certificates of deposit, mutual funds, government bonds and securities.