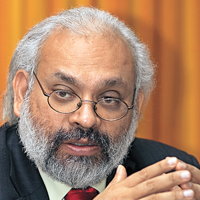 08 November, 2014
Print this article Font size -16+
Concerned over rising gold imports, the Reserve Bank of India on Wednesday said it is planning to come out with financial products on the lines of gold ETFs to give options to investors to take advantage of price movement in the precious metal. "...We can provide people with financial attraction of gold without them having physically own it. That would in a sense reduce the pressure on imports. So ETFs are one such," RBI Deputy Governor Subir Gokarn told reporters on the sidelines of a PHD Chamber event in New Delhi.
Exchange Traded Funds (ETFs) allow people to buy or sell gold without physically holding it. "We are looking at expanding scope (of products like gold ETFs) essentially sort of bank related products ... Essentially finding different ways of allowing people to take advantage of gold price movement but not physically buying it," Gokarn said. In the 2011-12 fiscal, India's gold imports stood at USD 60 billion and the quantum of import was 1,067 tonnes. In the April-June quarter of the current fiscal, however, gold imports had contracted by 18.4 per cent year-on-year to Rs 71,912 crore (USD 13 billion). Gold imports into the country has risen considerably in the last 3-4 years.
"We think that it (rise in import) has been driven by at least to some extent by the fact that people are looking at gold as a substitute for financial investments. That is reflected in trend we are seeing in financial saving by household," he said, adding that RBI is waiting for the report of the working group to deal with the problem of rising gold import.
Rising gold import has pushed the current account deficit (CAD) to a record high of 4.2 per cent in last fiscal. Referring to economic growth, Gokarn said there was a need to increase investment and spread it across all sectors. He said the fiscal correction would result in moderation of interest rates as the monetary policy could be formulated to promote growth. "As we see fiscal correction some of that is going to translate into lower interest rate as well because govt borrowing ... (will moderate) and it reduces interest rates. It also creates space for monetary policy to be more growth supportive," Gokarn said.
India's economic growth has slowed to a nine year low of 6.5 per cent in the 2011-12 fiscal. Industry had blamed tight monetary policy of the RBI as the reason for slowing of investment and resultant decline in industrial output.
(PTI)
Tags assigned to this article:
economy india news 3 rbi subir gokarn finance banking personal finance exchange traded funds etf gold etf