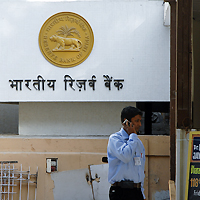 08 November, 2014
Print this article Font size -16+
The Reserve Bank of India may sweeten its expected 25 basis point interest rate cut on Friday with a similar reduction in the cash reserve ratio to ease tight market liquidity conditions as increasingly benign inflation gives it room to manoeuvre.

A slowdown in inflation, economic growth languishing at a decade-low 5 percent and expectations of a lower current account deficit thanks to cooling global commodity prices have also spurred expectations for less hawkish guidance from RBI Governor Duvvuri Subbarao.

The majority view remains for the central bank to leave the cash reserve ratio unchanged at 4 percent, the lowest since 1976, but some in the market said it may spring a surprise to prod banks to pass along interest rate cuts.

"Liquidity conditions have still not improved and so the RBI can do a surprise CRR cut to be a bit more forceful on banks to ensure transmission," said Abheek Barua, chief economist at HDFC Bank, who still expects the RBI to keep the CRR on hold.

The RBI's monetary transmission -- the impact of its rate moves on the economy -- has been hamstrung by tight funds in the banking system, which has kept banks' cost of deposits high and prevented them from cutting lending rates.

India's current account deficit touched a record-high 6.7 percent of GDP in the December quarter, prompting Subbarao to warn in March that there was "quite little" room for further policy easing.

However, the current account deficit is likely to ease to about 4.4 percent in the March quarter on higher exports and easing gold imports, according to a Reuters poll, still well above the long-term average of 1.5 percent but headed in the right direction.

Finance Minister P. Chidambaram defied expectations by cutting the country's fiscal deficit to 5.1 percent of GDP in the just-ended fiscal year, and aims to lower that to 4.8 percent in the current year, also giving the central bank room for easing.

"The second-order impact of a lower fiscal deficit will create room for more savings, help in bringing down inflation and in turn reduce demand for imported gold and cool off current account deficit. This will give RBI some space to sound neutral to hawkish in its rhetoric," said Rahul Bajoria, regional economist at Barclays Capital.

Headline inflation fell to its lowest in more than three years to 5.96 percent in March, below the RBI's own 6.8 percent projection, thanks to slow manufacturing inflation.

A Reuters poll last week showed that while 37 of 42 economists expect a repo rate cut of 25 basis points to 7.25 percent, the lowest since 2011, only 12 expected the RBI to cut the CRR.

While the RBI cut the repo rate by a combined 100 basis points in the fiscal year that ended in March, most banks have lowered their base lending rates by just 25 basis points, which has exacerbated sluggish growth.

However, while commodity prices have been softening globally, India's consumer price inflation remains in double digits, a key reason the RBI should not ease up its anti-inflation guard, some economists said.

Samiran Chakrabarty, chief economist at Standard Chartered Bank, said easing inflation might reverse in the second half of the fiscal year.

"The softening trend might be over as better growth will push up demand-side pressure and global commodity prices may also rise," he said.