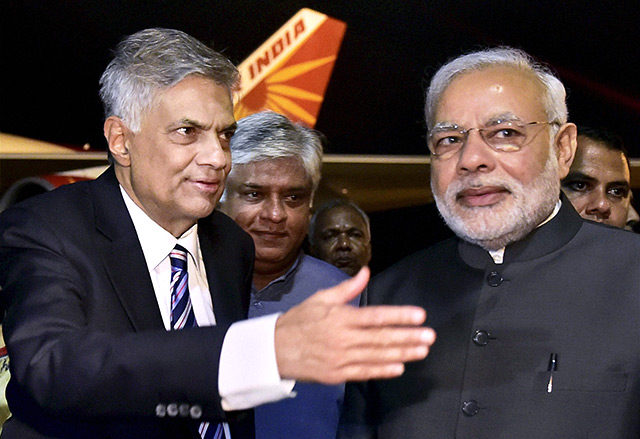 16 March, 2015
Print this article Font size -16+
The Reserve Bank of India has entered a $1.5 billion currency swap agreement with the central bank of Sri Lanka, Prime Minister Narendra Modi said on Friday after meeting Sri Lankan leader Maithripala Sirisena.
Sri Lanka rupee has been under pressure since early January and fallen around 1.5 per cent so far this year despite the central bank defended it with selling dollars.
"The Reserve Bank of India and the Central Bank of Sri Lanka have agreed to enter into a Currency Swap Agreement of $1.5 billion. This will help keep the Sri Lankan rupee stable," said Modi, who reached Colombo on the last leg of his three-nation tour that included Seychelles and Mauritius.
At the current valuation, one Indian rupee is equivalent to 2.12 Sri Lankan Rupee. It has lost almost three per cent value in comparison to the Indian rupee so far in 2015.
Modi is the first Indian Prime Minister to come to Sri Lanka on a standalone bilateral visit since 1987.
Last month, Sirisena visited India on his first foreign trip as Sri Lankan president.
Modi said that economic ties are "a key pillar of relationship between the two countries" and the bilateral trade has grown impressively over the past decade.
"Economic ties are a key pillar of our relationship. The progress we have made reflects our shared commitment to stronger economic cooperation," he said.
"I am aware of your concerns about trade with India. As I said in Delhi, we will try and address them," the prime minister said.
The two sides signed four agreements on visa, customs, youth development and building Rabindranath Tagore memorial in Sri Lanka.
The prime minister said his meeting with Sirisena has been very productive. It "gives me confidence and optimism about the future of our relations," Modi said.
"The agreement today on cooperation between our customs authorities is a step in that direction. It will simplify trade and reduce non-tariff barriers on both sides," he said.
"Our trade has seen impressive growth over the past decade. I am aware of your concerns about trade with India. As I said in Delhi, we will try and address them," he said.
Trincomalee Petroleum Hub
Modi said India stands ready to help Trincomalee become a petroleum hub and announced that New Delhi will provide a fresh Line of Credit of up to $318 million for the railways sector in Lanka.
"This will be used to procure rolling stock, and to restore and upgrade existing railway track," he said.
He lauded the efforts of Sirisena to improve relations with India and assured him of all help from Delhi.
"We stand with you in your efforts to build a future that accommodates the aspirations of all sections of society, including the Sri Lankan Tamil community, for a life of equality, justice, peace and dignity in a united Sri Lanka."
(Agencies)
Tags assigned to this article:
rbi news 5 narendra modi rupee reserve bank of india currencies sri lanka diplomacy ranil wickremesinghe maithripala sirisena