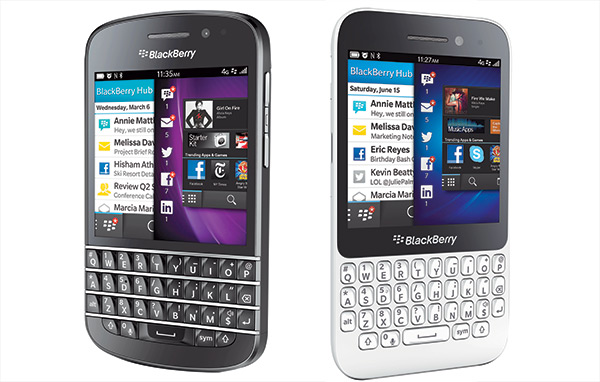 08 November, 2014
Print this article Font size -16+
Blackberry loy- alists can stop mourning the end of QWERTY keyboards. BlackBerry promised another generation of devices, modernised and yet not losing sight of whatever faithful users have loved all these years. And it delivered. The jury is very far out on whether these new devices have come too late and are compelling enough, but here they are regardless. Two ‘Q’ smartphones give consumers a choice of expensive and a-little-less-expensive.
The Q10 weighs in at a price of Rs 44,990. And when your head stops spinning, take in the fact that the Q5 cost Rs 24,990. I cannot pretend to understand BlackBerry’s pricing strategy but this much is clear that the company is segmenting its potential buyers into the young and the restless on one hand and the Type A hyper-connected professional on the other. And they believe the price is right. What both segments have in common is their need for a smartphone centred on communication more than anything else. Of course, all phones are about communication, but today your smartphone is your fitness trainer, your toy, your French teacher and a lot more and communication is just one item on the agenda. Not so the BlackBerry phones for which the focus is staying in touch. With the new BlackBerry 10 (now on 10.1) devices, Z10, Q10 and Q5 so far, the BlackBerry Hub is the very heart of the phone, created as it is to be the repository for all mail, messages, social communication, etc. You can send mail from the Hub as easily as you can tweet from it.
Both the Q smartphones have full QWERTY keyboards that have shed their smiles to become straight and neat. And although I’ve never been a full-time BlackBerry user, I have to say the keyboards are truly well-made. The Q10’s has metal frets prominent between keys and the Q5’s doesn’t. The keys are small but remarkably well spaced in a style that’s still familiar to BB users.

Keys are slightly sloped in the direction in which our finger is expected to travel. They even make the same press-and-let-go sound. For some reason, the Q5’s keyboard feels a little better to use and there are some murmurs about whether the Q5 will actually overshadow its more powerful sibling. Both devices have the distinct BlackBerry look, unlike the all-touch Z10. But I suppose anything with that keyboard will. Old users will notice that some of the keys they used earlier have gone, including the BB key and the call receive and reject buttons. Those functions have now shifted to touch. Speed dialing isn’t easy either and may call for a future fix. But there are lots of quick shortcuts one can use on the keyboard, specially with the browser, giving those who want to use touch as little as possible some relief.
The phones are very nice to hold in the hand and have really hit that sweet spot in ergonomics that makes them neither too big nor painfully small.  The two Qs are almost the same size, with the Q5 being a little taller. Both also feel quite premium, though that’s always a subjective view. A single swipe-up brings alive the remaining 60 per cent of the phone — the touch screen — and they feel adequate on both devices. They are smooth and fluid for basic tasks, but also for video chat which you can initiate so easily from BBM. I did not test out on games.
The cameras on neither phone are out of the ordinary. On the Q10, we have an 8MP and a 2MP. The Q5’s 5MP and 2MP cameras are make-do.
The Q10 is in matte finish black and in white, while the Q5 is in black, white, and a very attractive red.
Micromax Canvas 4
Micromax’s proposition has so far been to offer better value for money than Samsung does. Micromax reinforced the perception by following the same design language as Samsung. When the Canvas series smartphones debuted, they made large Note-sized phones affordable. With the Canvas 4, the plot has changed somewhat. It’s still Samsung-like, complete with gimmicks, but at around Rs 18,000 it’s no longer shockingly inexpensive. It’s also not a dramatic upgrade over the Canvas HD but the price certainly is. The Canvas 4 seems better built than previous editions. It has a blindlingly bright blue-white 720 x 1280, 5-inch HD IPS display. You have to blow on it to unlock the device and it’s surprisingly sensitive while executing this party trick. You can also shake to unlock. The screen is crisp enough and has pretty good viewing angles. Colours are quite nice too.
Micromax has put in lots of updates to apps and features, all running on Android 4.2.1 and doing a pretty smooth job of it too. I no longer have previous Canvases for comparison, but I do feel there’s significant fluidity over them on the Canvas 4. Powering it is a MediaTek 1.2GHz quad core processor with 1GB of RAM and 16GB of storage. There’s a microSD slot and 2 sim slots inside, along with the removable 2,000 mAh battery.
The 13MP primary camera has a lot of features and you can now use it to take 360 degree images. The quality is average, but poor in low light. The 5MP rear facing camera is also on the average side, despite the increase in megapixels.
The Canvas 4 is still a phone that gives you a lot for its price, but the scenario has changed since the first Canvas launch and there are more options today. It’s worth considering at a lower price.