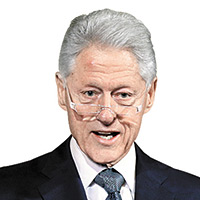 08 November, 2014
Print this article Font size -16+
If that is the worst thing you have ever done, all is well”
— Bill Clinton, former US President, to singer Justin Bieber, who apologised to Clinton after he was caught on tape cursing him

“My hands are clear”
— Oommen Chandy, chief minister of Kerala, on the solar power project scam

“I’m not qualified to respond as a financial adviser”
— Ben Bernanke, Federal Reserve chairman, in response to a congressman asking him whether his friend should refinance his house now or later, during his bi-annual testimony to Congress

“The moment there is a crisis, they (Congress) wear the burqa (veil) of secularism and hide in a bunker”
— Narendra Modi, chief minister of Gujarat

“The burqa of secularism is much better than naked communalism”
— Ajay Maken, AICC general secretary

“David Cameron is bankrolled by a few millionaires”
— Ed Miliband, leader of the opposition in the UK

“We have never left Bengal and we will never leave Bengal”
— Cyrus Mistry, chairman, Tata Sons, at a conference


“Oh, God, no, please”
— Jamie Dimon, chairman and CEO JP Morgan, replying to a question whether he would consider taking the place of  Federal Reserve chief Ben Bernanke