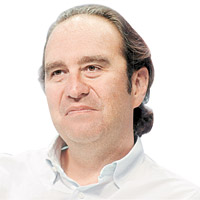 08 November, 2014
Print this article Font size -16+
“France makes enormous gaffes, like setting a 75 per cent tax that affects nobody but gets the whole world talking.”
—Xavier Niel, French telecom billionaire, in an interview to a newspaper

“If it weren’t for the government, the economy would be stronger.”
— ­Gregory Daco, senior principal economist at IHS Global Insight, on how the cutbacks in government employment are preventing a stronger acceleration in the US economy

“Karnataka’s message for Modi is that there is no Modi.”
— Salman Khurshid, foreign minister, on BJP’s dismal show in the Karnataka assembly elections

“...well, I don’t think it is really serious — it’s an accident.”
­— Abul Maal Abdul Muhith, finance minister of Bangladesh, on the collapse of a factory in  Bangladesh in which more than 900 people died


“I strongly suspect that there would be a positive economic advantage to the UK in leaving the single market.”
— Lord Lawson, former chancellor of the UK, in an article in a newspaper

“This is a cash-and-carry government.”
— Arun Jaitley, leader of the Opposition in the Rajya Sabha

“Corruption is nobody’s monopoly.”
— Kapil Sibal, telecom minister, while defending the UPA government over the cash-for-promotion scam in the Railways

“The CBI is like a caged parrot speaking his master’s voice.”
— justice R.M. Lodha, of the Supreme Court of India