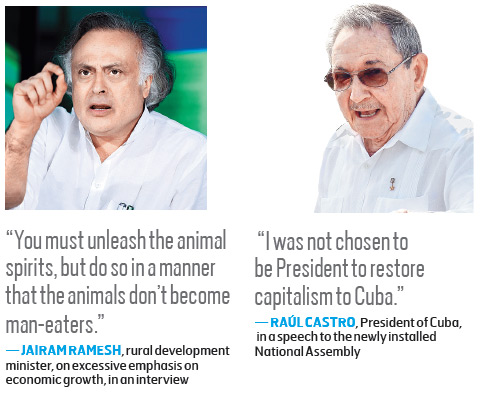 “It’s always the wacko birds on the right and the left that get the media megaphone.”
— John Mccain, former Republican presidential candidate, criticising the recent filibuster by fellow Republicans over the appointment of the new CIA director

“I also know English.”
— Ajit Singh, civil aviation minister, reacting to the finance ministry’s explanation on the language of the note on foreign direct investment in aviation

“...we’ll have some pretty tough talk with them. We already have.”
— Barack Obama, President of the US, on state-sponsored cyber attacks from China

“Once is happenstance. Twice is coincidence. Three times, it’s enemy action.”
— Arun Jaitley, leader of the opposition in the Rajya Sabha, on Italy refusing to send back its two marines charged with killing Indian fishermen

“Don’t depend too much on foreign wisdom, foreign money.”
— Murli Manohar Joshi, chairman of the Public Accounts Committee, to finance minister P. Chidambaram in a debate in the Lok Sabha on the Budget

“I attack people when they attack me.”
— Donald Trump, US business tycoon, in an interview to a radio station

“You must unleash the animal spirits, but do so in a manner that the animals don’t become man-eaters.”
­— Jairam Ramesh, rural development minister, on excessive emphasis on economic growth, in an interview

“I was not chosen to be President to restore capitalism to Cuba.”
— Raúl Castro, President of Cuba, in a speech to the newly installed National Assembly