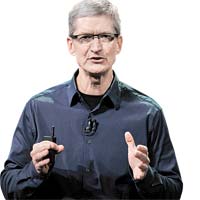 08 November, 2014
Print this article Font size -16+
I think his (Steve Jobs) DNA will always be the foundation of Apple”
— Tim Cook, CEO, Apple, in an interview

“I am not naïve to the position of the brand and the reputation. But I only see that as an opportunity”
— Dave Lewis, CEO, Tesco, after his first week in the company

“A generational change is taking place in Congress”
—Sheila Dikshit, former chief minister of Delhi, to a newspaper

“Jaguar is not in the volume race”
—Ralf Speth, CEO, Jaguar Land Rover, at the unveiling of the new Jaguar XE, a compact luxury car that is the

“We cannot deny that our returns are too low”
— Ben van Beurden, CEO, Royal Dutch Shell, in an interview, saying he is prepared to see the company shrink, if that boosts returns

“Our governments are currently negotiating a bilateral investment treaty, which is worthwhile. But why not aim instead for a free trade agreement?”
— John McCain, US Senator, at a conference, on Indo-US trade ties