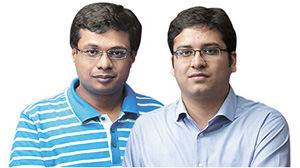 08 November, 2014
Print this article Font size -16+
We know that your experience was less than pleasant. We did not live up to the promises we made and for that we are really and truly sorry”
— Binny Bansal and Sachin Bansal, co-founders of Flipkart, in an email to customers, apologising for the glitches that marred the Big Billion Day sale
“Twitter has become the central nervous system for public communication. It’s how everybody from the Pope to the president of Iran communicates”
— Marc Andreessen, co-founder of Silicon Valley-based venture firm Andreessen Horowitz, in an interview
“Hillary is going to run”
— Warren Buffett, chairman & CEO of Berkshire Hathaway, making a prediction on Hillary Clinton running for the US presidency in 2016
“As long as I am in Delhi, no power can split Maharashtra”
— Narendra Modi, Prime Minister of India, dismissing opposition charges accusing him of having a hidden agenda to split Mumbai from Maharashtra
“I wish we had not closed Twitter. It was wrong. Now we’re trying to restore a wrong perception (about Turkey)”
— Volkar Bozkir, Turkey’s EU minister, accepting his country made a mistake in blocking access to Twitter on March 20, hours after Recep Tayyip Erdogan, who became the president on 28 August, vowed to close down the social media platform
“I’d really like to see central banking as a ‘boring’ activity again. The desired state of affairs is when nobody discusses monetary policy in pubs”
— Mojmir Hampl,  deputy governor, Czech National Bank, on how central bankers have had enough of living in the limelight since the 2008 crisis
“I’m in it to whip the pants off anybody competing on the same football field”
— Bill Gross, the legendary investor, who recently left Pimco where he managed the world’s largest bond fund, on his plans to make the relatively small fund at Janus Capital a big hit
(This story was published in BW | Businessworld Issue Dated 03-11-2014)
Tags assigned to this article:
columnists prosenjit datta web exclusives opinion 5 bjp narendra modi prosaic view