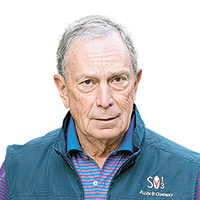 08 November, 2014
Print this article Font size -16+
I have told your boss I think he should stop twittering”
Michael Bloomberg, to a New York Post reporter. The newspaper is part of Rupert Murdoch’s media empire

“You and I may agree if some chai paani has to be given, to get over it, but the younger generation will not tolerate it anymore”
Vinod Rai, former comptroller and auditor general of India, in an interview

“I am too grown up to be nervous about an election”
Sheila Dikshit, chief minister of  Delhi, prior to the state assembly elections in which her party was routed

“People around the world are confused. They are bemused. But they are not amused by what’s happening”
Christine Lagarde, head of the IMF, on the US government shutdown
“When I was growing up, Bill Gates was my hero”
Mark Zuckerberg, founder of Facebook

“I wish to God that Apple and Google were partners... ”
Steve Wozniak, co-founder, Apple

“You must unleash the animal spirits, but do so in a manner that the animals don’t become man-eaters”
Jairam Ramesh, rural development minister, on excessive emphasis on economic growth