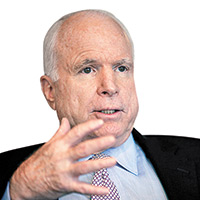 08 November, 2014
Print this article Font size -16+
Those involved in it went on a fool’s errand, that’s just a fact”
— John McCain, former Republican presidential candidate, on his party-led government shutdown

“I wish to God that Apple and Google were partners in the future”
— Steve Wozniak, co-founder of Apple, in a television interview

“Apple’s not a bank... Shareholders haven’t bought the stock to be a bank”
— Carl Icahn, billionaire investor, pointing out that Apple is failing to return cash to shareholders
“As a priority? It is a joke”
— Bill Gates, founder Microsoft, on connecting the world’s population via the Internet

“This effort (is) demanded of businesses that choose to pay such high annual salaries”
— Francois Hollande, President of France, to French football club owners, on the 75 per cent tax on salaries exceeding 1 million euros