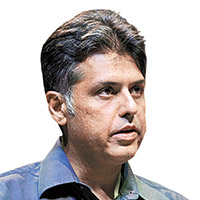 08 November, 2014
Print this article Font size -16+
“One of the greatest damages done to this country was by the former CAG... it was the R-virus that derailed the growth story”
— Manish Tewari, I&B minister, referring to Vinod Rai, the former CAG

“We will go right up to the point of extreme idiocy, but we won’t cross it”
— Warren Buffett, billionaire investor, on the US government shutdown, in a television interview

“Lalu Prasad is a hero and he will remain a hero”
— Rabri Devi, former chief minister of Bihar and Lalu’s wife, after his conviction

“Let us also allow minorities to do that (default on loans)... this is part of development process”
— G. Parameshwara, president, Karnataka Congress, demanding that minorities be provided loans even at the risk of defaults

“People around the world are confused. They are bemused. But they are not amused by what’s happening ”
— Christine Lagarde, head of the International Monetary Fund, on the US government shutdown