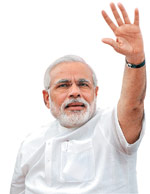 08 November, 2014
Print this article Font size -16+
Congress will not fight the next Lok Sabha elections but will field the CBI instead”
— Narendra Modi, at a BJP rally

“Chidambaram is practising terrorism with facts”
— Yashwant Sinha, former finance minister, in response to P. Chidambaram’s assertion of better growth under the UPA

“Wonder why Narendra Modi should  stage a fake encounter with facts”
— P. Chidambaram, finance minister, in reply to Narendra Modi’s comments on high growth during the NDA’s tenure

“I haven’t had a cigarette in probably six years. That’s because I’m scared of my wife”
— Barack Obama, President of the US, in an admission captured by an open microphone
“We had a bit of a falling out. I think we are getting over that. We interfered in your politics two hundred years ago when we sailed up the river and burnt the White House”
— David Cameron, British Prime Minister, in an interview to a US TV channel

“The Army transfers money to all the ministers in Jammu and Kashmir...”
— V.K. Singh, former Army chief

“The biggest fear of bankers is the stupidity of bankers”
— John W. Allison, chief executive of Home BancShares

“There are a variety of possible alternative images that could be utilised such as a cow, a goat, a flower... an aircraft is an entirely inappropriate flight of the imagination”
— Alan Shatter, justice minister of Ireland, on Apple’s iOS 6 Maps incorrectly identifying farmland as an airport