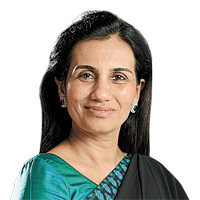 08 November, 2014
Print this article Font size -16+
Chanda Kochhar
MD & CEO, ICICI Bank
THE BANKER WHO KEEPS KHAYAL AAPKA
Recall the early 2000s. ICICI Bank’s retail banking foray had woken up State Bank of India; it had taken the fight to HDFC Bank’s doorstep. The public face of the young bank’s moves was its then head K.V. Kamath, but its nuts-and-bolts were in Chanda Kochhar’s hands. The 1984 ICICI recruit had been spotted as a winner at the start of the 90s; her career took the elevator soon after. Her biggest test came after she moved into the corner office in May 2009. The world came down with a giant financial flu; the bank’s unbridled growth funded largely by costly wholesale deposits led to an uptick in dud loans and flaky returns. Kochhar weathered it by going back to the basics, in PowerPoint parlance the 4 Cs — credit growth, credit quality, costs and Casa (current & savings account deposits).

Kalpana Morparia
CEO JP Morgan, India
UNRUFFLED NEGOTIATOR
Her first job was that of a school teacher. She studied law after marriage and joined Matubhai Jamiyatran & Madon for little but fresh air! ICICI’s K.V. Kamath was instrumental in her making the shift from being a corporate lawyer, and she went on to head the bank’s treasury in 1996. In 2001, she played a key part in ICICI Ltd’s reverse-merger with ICICI Bank. A year after retirement from ICICI Bank as joint MD, she took over as India head of JP Morgan. Good at dealing with tinder-box situations, Morparia was roped in to advice Kokilaben Ambani, when her sons Mukesh and Anil were at daggers drawn; it helped she was conversant with Gujarati. God-fearing Morparia is also religious about shopping.

Arundhati Bhattacharya
Chairperson, State Bank of India
BANKER TO EVERY INDIAN
To her goes the distinction of not only being the first lady chairperson of ‘Big Daddy’, State Bank of India (SBI), but also the first of the gender to lead a Fortune 500 company in India, and being the only woman banker on that list of mammoths. Her resume is impressive: she has worked at the bank’s New York office, been involved in the launch of new businesses — SBI General Insurance, SBI Custodial Services and the SBI Macquarie Infrastructure Fund. It is early days yet to pass a verdict on her as SBI boss — she got onto the saddle only in October 2013. Typically, the first two quarter results after a new incumbent are a reflection of steps taken by the predecessor. And, in the case of Bhattacharya, she was at SBI Caps, the investment banking arm of SBI. Bhattacharya has made a start though. Women employees of SBI can now take a two-year sabbatical for children’s education; it is to be extended to single male parents as well.

Naina Lal Kidwai
Group General Manager, HSBC (India)
FIRST AMONG EQUALS
She is the first Indian woman to graduate from the Harvard Business School, and the first to head the operations of a foreign banking and financial services entity. Naina Lal Kidwai broke the glass ceiling very early when she became head of ANZ Grindlays Bank’s investment banking (i-banking) in 1994. She stitched together the joint-venture between J M Financial and Morgan Stanley in 1997. She played a crucial role in Wipro’s NYSE listing; the three-way Batata telecom merger and in a number of privatisations. Her shift to HSBC in 2002 as its deputy managing director coincided with the increase of its footprint in India; it is now a full-services player. Kidwai is fond of Indian classical and western music, loves to trek in the Himalayas, and enjoys wildlife.

Renu Sud Karnad
MD, HDFC
THE HOMEMAKER
Just how many professionals can you think of these days who have never changed a job? Karnad is one. She joined HDFC in 1978 as a 26-year old. “Group ICICI” and “Group HDFC” may today be rivals, but Karnad’s first job interview was with H.T. Parekh (then chairman of ICICI Ltd, and the uncle of Deepak Parekh). Parekh was setting up HDFC and wanted her to sign up. Karnad has been with HDFC since then. Known for her wit and diplomacy, folks close to her say she takes a humane approach towards complex issues. The country’s leading home-maker believes “people are the key to any organisation, and self-belief is the key to success”.

Vedika Bhandarkar
MD & vice-chairman, Credit Suisse
THE RECLUSIVE DEALMAKER
She’s from the famed ICICI Bank stable, and is among the elite breed of the country’s top i-bankers. Vedika Bhandarkar had a five-year stint at ICICI-Securities in its joint-venture days with JP Morgan, and then moved over to standalone J P Morgan as its managing director, and head of i-banking in 1998.

In 2010, she took over as vice-chairman and managing director at Credit Suisse. Yet for all the deals under her belt, she is a relative “recluse” as far as the headlines are concerned. She is different in another way: she is a physics and math graduate; while many of her contemporaries are engineers. But the felicity with numbers has helped her in investment banking a lot. A strong votary of “work-life balance”, she has struck a pact with her husband: both will not travel at the same time.

Aashu Suyash
CEO, L&T Mutual Fund
BALANCED PORTFOLIO
A financial services veteran of over 20 years, the longest part of her career was spent ‘without sleeping’ at Citigroup! During her 15-year stint at the US banking major, she held several important positions across operations, investment banking, finance, sales and marketing and general management, and yet balanced work well with family life. “Joining the work world is often referred to as joining the rat race. I have often debated on the point of getting to the top if all you get to be is a ‘top rat’! At the same time, winning is very important. I therefore feel, it is all down to making choices”, she says. You cannot argue with somebody who can internalise so well! After her stint with Citi, she moved over to Fidelity as managing director and country-head from December 2003 till November 2012. Now to see if she can make the young tiger, as she calls L&T Mutual, roar.
Tags assigned to this article:
magazine hdfc icici bank credit suisse sbi jp morgan hsbc axis bank naina lal kidwai shikha sharma kmb chanda kochhar chitra narayanan renu sud karnad kalpana morparia renuka ramnath usha thorat arundhati bhattacharya magazine 24 march 2014 the c-suit women magazine supplement 24 march 2014 vedika bhandarkar aashu suyash l and t mutual fund mutiples alternate asset management cafral shanti ekambaram