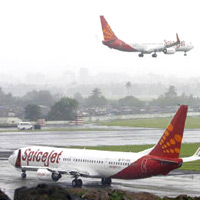 08 November, 2014
Print this article Font size -16+
Qatar Airways is not interested in buying a stake in budget carrier SpiceJet<SPJT.BO> or any other Indian airline, the Gulf carrier's chief executive said on Tuesday.

Shares in SpiceJet rose 4.1 percent on Tuesday after the Times of India reported it was close to selling a stake to a foreign carrier, which the newspaper said was most likely to be Qatar Airways.

"Qatar Airways categorically denies it is interested in investing in Spicejet or any other Indian airline," CEO Akbar al-Baker said in a statement.

"This is pure speculation by individuals who deliberately want to spread such unfounded rumours to raise the stock value of their entities."

Al Baker said Qatar Airways would only look at investing in India once it believed that laws and regulations in the country had been "properly liberalised".

Earlier, budget carrier SpiceJet said it is "premature" to comment on the possibility of selling shares to any interested investor, reiterating that some investors had shown interest after a recent rule change in the sector.

SpiceJet called media reports in the recent past on a possible equity infusion in the company as "speculative".