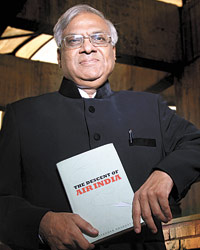 08 November, 2014
Print this article Font size -16+
You may have fewer friends in aviation after the book’s release...
The kind of transition that Air India has gone through, from being an iconic airline to being virtually grounded, has few parallels. The descent, therefore, needed to be chronicled. One of the ironies of the situation is that each stakeholder has been vociferously blaming the other for the airline’s downfall withour ever introspecting on his own role. I have therefore narrated the events as they unfolded in an unbiased and candid manner. I hope the various stakeholders will mirror their role objectively.

So who should be blamed for the decline of Air India?
Everyone associated with the carrier. The government, as the owner, the civil aviation ministry, the ministers of recent years, CMDs, board members, senior management, staff and unions. The phase of 2004-08 — when V. Thulasidas was the CMD and Praful Patel the civil aviation minister— can be described as the worst in terms of lost opportunities, mounting losses, increasing political interference, ­corruption, nepotism, lack of corporate governance — all leading to the financial crippling of Air India.

Is privatisation the only way forward, or closure?
Looking at the balance sheet dyed in red and a unionised workforce that still hasn’t realised the full gravity of the problem, something drastic needs to be done. Whether privatisation is the best course, I wouldn’t like to commit myself to. Civil aviation minister Ajit Singh recently hinted at it but I wouldn’t give credence to the government’s plans or motives because in the past, their grand plans, instead of helping, have always harmed the airline. I would hate to concur with the suggestion (of a closure), even if legitimate. What we need is fixing of accountability. Who pushed Air India into such a precarious position? Also, is lack of finance the only problem confronting Air India? What has the government done to professionalise the management of Air India?

Ultimately, it is the government’s responsibility to ensure that the airline, if it has to survive, does so in a robust manner and not as an also-ran, ­gasping for aid all the time or falling in public esteem.

Click to read an extract from The Descent of Air India