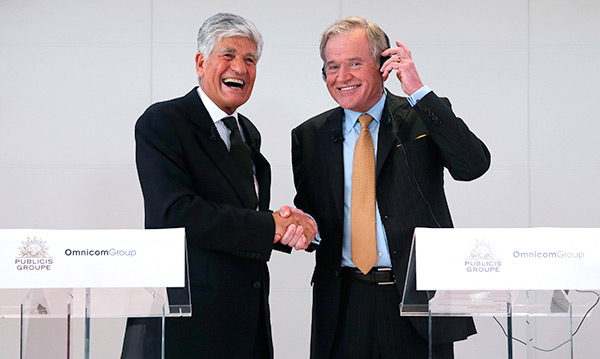 08 November, 2014
Print this article Font size -16+
A proposed mega-merger between global ad agencies Publicis and Omnicom could bring rival accounts such as Coca-Cola and PepsiCo under one firm, underscoring the scale of the $35.1 billion deal and the potential conflicts it raises.

The companies said on Sunday, 28 July, that the deal - presented as a merger of equals - would give the combined firm the necessary scale and investment firepower to cope with rapid changes wrought by technology on the advertising business.

At a press conference in Paris, the CEOs of the two companies pledged they could handle concerns from major clients who may find the marriage too close for comfort, as well as address questions from regulators who are concerned about maintaining a competitive landscape.

"This is a new company for a new world," Publicis Chief Executive Maurice Levy said. "It will be able to face the exponential development of new Internet giants like Facebook and Google, changing consumer behavior, the explosion of big data, as well as handle the blurring of roles of all the players in the market."

Levy said both companies had years of experience setting up "strict firewalls" to protect clients' interests. Even so, the deal is likely to create some instability as rival ad agencies try to poach clients while Publicis and Omnicom are distracted by the merger.

"This is going to cause turmoil within the industry," said a senior industry executive. "Everyone is going to reassess where they stand and every company outside of Omnicom and Publicis will be all over their clients during this period."

Morningstar analyst Michael Corty said large clients, such as Omnicom's PepsiCo, AT&T and Microsoft Corp, as well as Publicis' Coca-Cola, Verizon and Google Inc, were used to having leverage in negotiations as they push agencies to give them better payment terms.

"We're getting to a new frontier now and major companies might not like the change," he said.

The jumbo transaction size is rare among the world's "Big Six" advertising groups, which have spent the past few years buying up much smaller targets in emerging markets and among Web marketing specialists. If completed, it will shift focus on those left standing alone, such as current leader WPP, US-based Interpublic, France's Havas and Japan's Dentsu.

Martin Sorrell, chief executive of WPP, said the pressure for rivals to respond will be great. "It's an extremely bold, brave and surprising move," Sorrell said in an interview on Sunday. "Further consolidation of our industry is inevitable.

'Almost As A Joke'
It all began when Levy casually mentioned the idea of a merger to Omnicom CEO John Wren at a social event in New York about six months ago. "I said it almost as a joke, but then once we each went back and reflected, it didn't seem so crazy," Levy said at a press conference at Publicis headquarters.

The two executives later brought in Rothschild Group to advise Publicis and Moelis & Company for Omnicom, choosing independent firms instead of larger banks in part to try to prevent leaks.

But when thorny issues cropped up in the talks, Wren and Levy settled things in one-to-one phone calls, the two men said. In the last 10 days leading up to the deal bankers, lawyers and principals were basically in lockdown hammering out details, a source familiar with the matter said.

The new company - Publicis Omnicom - will be traded in New York and Paris. It will overtake WPP and have combined sales of nearly $23 billion and 130,000 employees. It brings together Publicis brands such as Saatchi & Saatchi and Leo Burnett with Omnicom's BBDO Worldwide and DDB Worldwide.

The French and US company said shareholders in Publicis and Omnicom would each hold about 50 per cent of the new company's equity. Wren and Levy will jointly lead the new company for the first 30 months, then Levy will become non-executive chairman and Wren CEO.

The two veteran CEOs even chose the neutral territory of the Netherlands for the new holding company.

Yet questions remain whether the equal nature of the marriage will stand the test of time. Pierre Ferragu, analyst at Sanford C. Bernstein Research, said it could take a few years to see if the cultures of Publicis and Omnicom would blend together or if fissures appear in the so-called merger of equals.

"There are mechanisms in place in the first few years to protect the parity of management so it should be fine in the transition period. But in these kinds of mergers, there are always tensions. Usually one side or the other eventually imposes its way of doing things on the other."

Risks
The new group will also have to get antitrust clearance from authorities in around 45 countries. "We've looked at the antitrust issues very carefully and are not expecting anything that would prevent us from going forward," said Wren.

Morningstar analyst Corty said it was unlikely the two companies would have progressed to this stage if they had doubts about getting approval.

Others were less optimistic. Bert Foer, head of American Antitrust Institute, predicted that clients of the two advertising giants would object to the deal and that media companies that depend on advertising to survive would complain to antitrust authorities. Asked about regulatory approval, he said: "I don't think they should get it."

The main competition issue will be in media buying, where advertising agencies purchase TV or print ads on behalf of customers. Pivotal Research analyst Brian Wieser estimates that Publicis Omnicom will account for almost 20 per cent of global media spending and closer to 40 per cent in the United States.

To face such concerns, the groups might have to sell small brands in some countries, said a person close to the talks.

It is unlikely France will derail the deal despite the fact that a national champion is tying the knot with an American rival. Levy said the government had already expressed support for the merger.