London [UK], January 20 (ANI): Bollywood star Priyanka Chopra Jonas on Wednesday treated fans to a glamorous selfie and called herself an "updo expert."
The 'Baywatch' star hopped on to Instagram to share the selfie in which she stunned in a minimal make-up look. The 'Fashion' star is seen in an updo hairstyle as she decked up for a virtual press junket meet.
Chopra is seen in a blue shirt and looks flawless.
The 'Isn't It Romantic' star captioned the picture as, "I must say, I've become quite the updo expert #VirtualPressJunketLife." 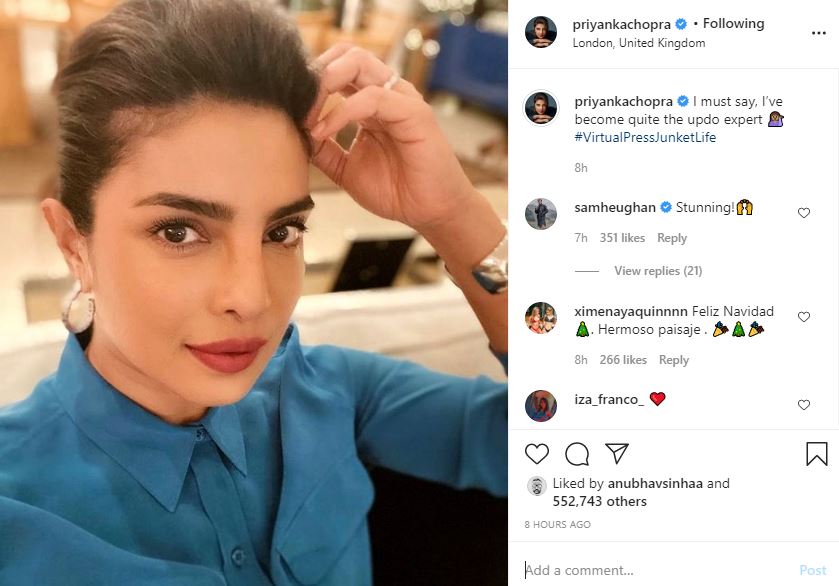 The actor seems to have got ready for her upcoming film 'The White Tiger'.
The movie marks the first lead role of actor Adarsh Gourav, known for films like 'My Name is Khan', 'Mom' and Netflix series 'Leila'. It also stars Priyanka Chopra Jonas and Rajkummar Rao in lead role among others.
In the film, Priyanka Chopra Jonas essays the role of Pinky Madam, a first-generation immigrant in the US, who is married to Ashok (Rajkummar).
Directed by Ramin Bahrani of 'Fahrenheit 451' and '99 Homes' fame, 'The White Tiger' has been executive produced by Chopra Jonas along with Emmy award-winning filmmaker Ava DuVernay. (ANI)