New Delhi [India], January 11 (ANI): Global star Priyanka Chopra Jonas treated fans with a gorgeous throwback picture of herself on Monday.
Walking down the memory lane, the 'Fashion' star took to Instagram and shared a throwback picture of her teenage. In the picture, Chopra flaunts her lean body while posing effortlessly for the camera.
She is captured wearing a black hipsters teamed up with a white and golden patterned crop top inside a black over the jacket. Open hair and no makeup look complemented her look. While showcasing her toned collar bones, Chopra is clicked flaunting her radiant smile.
The picture that accumulated more than six lakh likes within a few minutes of being posted, the 'Agneepath' star wrote, "Lean, mean and all of 17!!!#Unfinished." 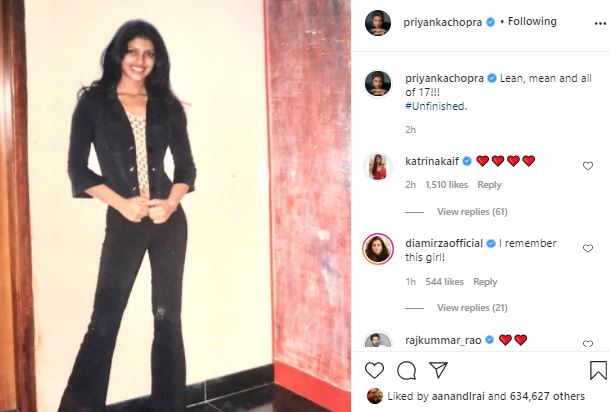 Celebrity followers including Katrina Kaif, Dia Mirza, Rajkummar Rao and former Miss Universe of India Lara Dutta Bhupathi also showered love for Chopra in the posts' comments section.
Meanwhile, on a professional note, Priyanka Chopra Jonas recently announced the wrap up of her upcoming English romantic drama flick 'Text For You' directed by Jim Strouse. Apart from that, she will also be seen in 'Matrix 4' starring Keanu Reeves and in 'The White Tiger' alongside Rajkummar Rao.
The former Miss World, who was working on her memoir book 'Unfinished', is reportedly going to release in the following month. (ANI)