Priyanka Chopra Jonas wraps up 'Text For You' shoot

Priyanka Chopra Jonas wraps up 'Text For You' shoot

London [UK], January 10 (ANI): Global star Priyanka Chopra Jonas on Saturday (local time) announced the wrap up for her next Sony's Screen Gems romantic drama, titled 'Text For You'.
Chopra Jonas who is in London shooting for her upcoming flick 'Text For You' that also features Celine Dion and Sam Heughan took to her social media handles and shared a picture that showed her smiling as she looks in the mirror while holding the script of the film in her hands.
With the picture, she wrote "That's a wrap! Congratulations and THANK YOU to the entire cast and crew. See you at the movies." 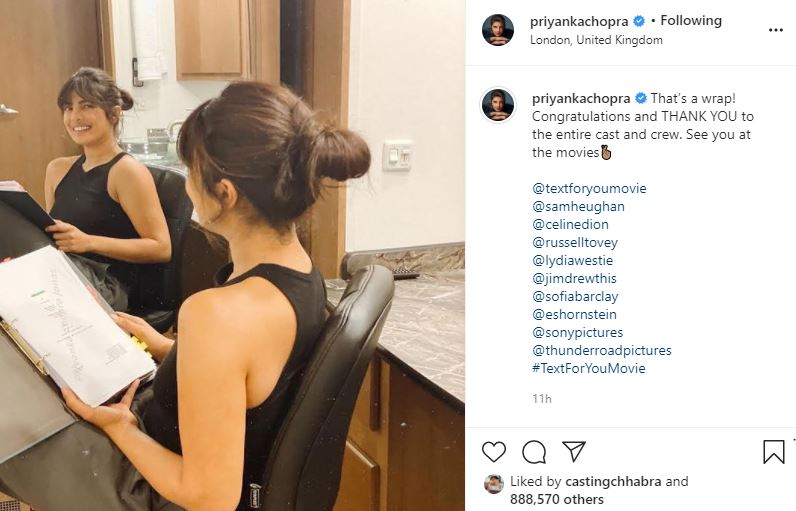 Earlier, the 'Fashion' star posted a behind the scene self-taken picture from the sets for her forthcoming romantic flick where she announced her last day on the set.
Of the late, Chopra made headlines for avowedly defying new COVID-19 strain-induced lockdown rules in London by visiting a salon.
Meanwhile, on a professional note, the 'Text For You' movie that Priyanka Chopra has wrapped up recently is directed by Jim Strouse, from a screenplay by Strouse and Lauryn Kahn. The film is an English remake of the German-language film 'SMS Fur Dich,' based on Sofie Cramer's novel.
The story of the film revolves around a woman who, after tragically losing her fiance, starts to send romantic texts on his old mobile number. (ANI)

Tags assigned to this article:
Priyanka Chopra Text For You hollywood global star Wrap up