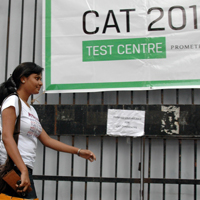 08 November, 2014
Print this article Font size -16+
With students from engineering background dominating management programmes in IIMs, the premier B-schools are planning some changes in the Common Admission Test to ensure a broad-based representation.
"Efforts are on to have a relook at the Common Admission Test (CAT)...some changes that will be helpful for people from other discipline," said CAT 2012 convenor and professor at IIM Kozikode, S S Kumar.
He, however, refused to divulge details saying the plan is still at the drawing board stage and deliberations are underway.
Talking to reporters here, he said over 67 per cent (over 1.44 lakh) of the candidates appearing for the ongoing the CAT this year are from engineering discipline. Total number of candidates registered for CAT are 2,14,068.
IIM Kozhikode director Debashis Chatterjee said the aim is to have a broad-based talent of human pool across disciplines and the best minds.
Managing director of Prometric India Soumitra Roy which is partnering with IIMs in holding the test said by the end of today over 36,000 candidates would have appeared for the test, being held in a staggered manner till November 6.
The registration this year for the CAT test has also thrown in some interesting trend.
Close to 17,000 students appearing this year have come with two to three year experience. Percentage of candidates coming from agriculture and architecture background have also increased.
However, candidates appearing from Humanities stream have dropped from 3,780 last year to 3,404 this year.