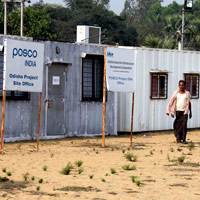 08 November, 2014
Print this article Font size -16+
A few weather-beaten shipping containers, a swathe of sand and a bitterly divided village: that is all South Korea's Posco has to show seven years after it announced plans for a $12 billion steel mill on a fertile strip in Odisha.

Last week, the project took a step forward as land was taken over from farmers for the first time since 2011, and yet Posco is still a long way from its goal of forging steel there.

Despite the years of protests and battles over environmental clearances, Posco insists it is not about to throw in the towel. However, if a court ruling on access to local iron ore goes against it, that could push it over the edge.

The fiasco over what was billed as India's single largest planned foreign investment epitomises the slow pace of industrialisation in a densely populated country where almost every major project involves moving farmers off their land.

But the issues refuse to go away.

"Police out! Death to Posco!" a hundred or so villagers and Communist Party activists shouted at a group of policemen who set up camp in the village of Gobindpur last week, the first police presence there since protesters rose up against the project in 2006.

A few kilometres away, Posco has built a site office in nine shipping containers. Along with a generator, a flimsy barbed-wire fence and a couple of signs, this is all the work that has been done on the 2,000 acres (809 hectares) set aside. They need another 700 acres before work can begin.

Posco India reiterated its "strong resolve and commitment" to the project in a statement on Friday. But analysts say the company may think again if a pending Supreme Court decision on preferential access to a local iron ore mine goes against it.

"They didn't come here because of their love of India," said Rakesh Arora, a metals expert and head of research at Macquarie Capital Securities (India). "Without the iron ore it would be cheaper to set up in China, where the capital costs are lower."

An Odisha court has already ruled against Posco on guaranteed supplies from the Kandahar iron ore reserve. Last month, the Supreme Court asked the central government for its opinion and it is expected to rule on the case this year.

Two senior sources at the Posco project said the company would for now wait out the problems and it did not want to upset India, which it sees as an important long-term market.

The company has already scaled down the project because of the protests. Private farms and the village of Dhinkia, where the most fierce opposition has come from, are now excluded from the project's first 4 million tonnes per year phase. The final goal is to produce three times that.

Posco has also pushed its earliest start date back to 2017 after a tribunal suspended environmental clearance for the mill.

Vines Or Jobs
The project has split coastal communities in Odisha. One group of 52 families, for instance, says they were driven from their village by protesters after they criticised the movement's Communist leaders. They now live in one-room houses on a small stipend paid by Posco.

"The plant will bring jobs. Right now people migrate from here because there is no work," said Kabindra Sahoo, 33, who has not worked since leaving his village six years ago.

At the protest site people see things differently. Jhulia Das is an elderly grower of betel - a vine leaf used to wrap a heady mix known as 'paan' that is chewed by millions of Indians.

Cultivating betel, along with coconuts, rice and cashews, provides a small but steady income for thousands of families living near the proposed mill site. Das fears losing that.

"They will take our land, our mother earth, destroy our vines. How will we survive?" said the tattooed Das, one of a group of barefoot women in bright saris who had joined the protest.

Odisha government owns the sandy land for the steel plant by the Bay of Bengal, but farmers like Das have cultivated betel there for years. Posco is paying $21,500 per acre for the land and a small monthly allowance to farmers until the plant opens, when they are promised jobs.

Odisha straddles India's mining belt and holds a third of the country's iron ore reserves, a quarter of its coal, half its bauxite and more than 90 per cent of its nickel and chromite. The state accounted for about a fifth of all industrial investment proposals in India in the last four years.

Since January 2008, Odisha has attracted investment proposals worth $210 billion from Tata, Jindal and Posco, along with global heavyweights such as ArcelorMittal and Vedanta Resources. All have faced protests and delays.

Last week, officials were able to make some progress at the Posco site, reclaiming some cultivated land. The protests are smaller than they were two years ago, and more farmers are taking the cash and letting police pull down their vines.

But the protesters won this round - after four days the state government suspended the operation until after a session of the state's parliament that ends in March.